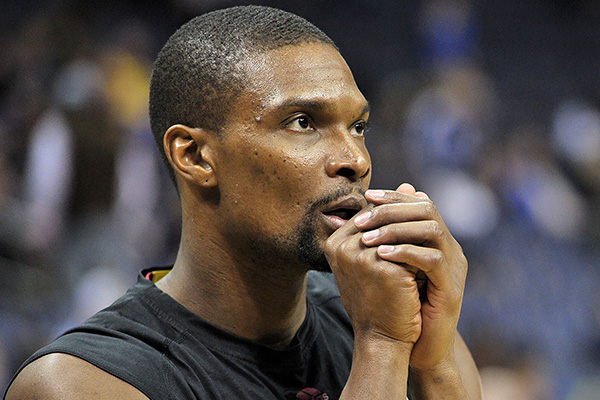 After seeing his 2014-15 season come to an abrupt end due to blood clots in his lungs, the Miami Heat’s Chris Bosh is chomping at the bit to get back on the court for what will be his 13th season in the NBA.

Bosh’s enthusiasm came through loud and clear during a Thursday morning appearance on SiriusXM’s NBA Radio. He told hosts Mitch Lawrence and Frank Isola that he was eager to insert himself back into a lineup that’s added some key players since he last played.

Bosh specifically pointed out the pending thrill of playing with Goran Dragic by saying:

“Just the chance to play with Goran; when we made that trade for him I was excited and then I found out my other news so I’ve been waiting six, seven months to start building a relationship on the court with him.”

However, Bosh also made a point to note how the need to establish team chemistry early on is key, given the talent on the Heat squad:

“It’s very exciting. We have the talent on paper to be successful. We just have to make sure that we come and do what we’re supposed to do every day in practice and build that camaraderie and everything.”

Bosh also reflected on the perspective he’s gained since his serious health issues that developed in February:

“I’m very motivated and happy to be playing. I knew it could be over just like that but I feel like I’ve been given a second chance, so it’s kind of refreshing.”

Coupled with that awareness was also Bosh’s competitive streak coming through, evidenced when he said:

“This is the most time I’ve taken off whether I meant to or not and I’ve really gotten a chance to fall back in love with the game and just build that appetite for destruction back up.”

Bosh’s confidence was also present, especially when asked if the Heat could reach the NBA Finals, despite the presence of teams like Cleveland and Chicago that are picked to finish above them:

“Absolutely, I think we do. We have the experience, we have the talent, we have the leadership, we just all have to bring those things together. (If we) bring the chemistry on the court, believe in ourselves, and just go out there and let it hang loose and compete, then I think we’ll be alright.”

Looking to expand awareness of his health problem to help other individuals detect signs of blood clots for proper treatment, Bosh’s appearance was part interview and part infomercial, with Bosh appearing on behalf of Janssen Pharmaceuticals.
[xyz-ihs snippet=”Responsive-Ad”]