Don't Miss
Home / Media / Chris Bosh: ‘I Think We’re As Good As Anybody in the League’

Chris Bosh: ‘I Think We’re As Good As Anybody in the League’ 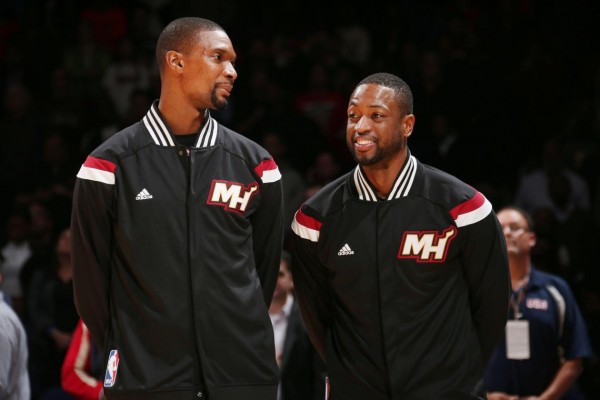 It’s no secret that the Miami Heat have had an excellent offseason.

The Heat have managed to re-sign star players Dwyane Wade and Goran Dragic. The draft selection of Justise Winslow and the free agent additions of pieces like Amar’e Stoudemire and Gerald Green have only fueled the belief that the Heat are back as contenders.

Bosh was in attendance at the Heat’s summer league loss to the Boston Celtics on Tuesday, as he commented on Miami’s chances of contending for a championship this upcoming season:

“As far as collective punch, I think we’re as good as anybody in the league.”

When it comes to the increased expectations of contending, the 12-year veteran said that he embraces the pressure:

“I love it. It’s better than them saying, ‘Oh, they’ll be a seven seed.’ If I was to pick my poison, I would pick being a top contender….We just need a chance to be in the conversation. Now it’s on us to exceed those expectations.”

Miami is coming off of a 37-45 non-playoff season. The season was not only tough on the franchise, but on Bosh himself as he was sidelined for the last half of the year due to blood clots on his lungs.

Although he has yet to participate in contact drills, the veteran has been working out for the past month. Bosh spoke about where he’s at in the recovery process:

“Still working through that lung expansion. You kind of feel it a little bit. But it’s good for me. You have to stretch it out. I will come back in better shape because before you really don’t think about things like that, the ability to get more oxygen to expand your lungs. It’s a major point of emphasis for me.”

The Heat ranked 28th in the NBA in bench scoring last season. With Stoudemire, Winslow and Green now coming off the bench for Miami, the team now has one of the most stacked rosters in the league.

How does the 10-time All-Star feel about the Heat’s newcomers?

“Coach Spoelstra is going to ask us…to trim down our minutes in the starting group, to have that constant flow of energy throughout the game. Our depth is going to be a tool we can really use.”

Bosh also spoke about how the Heat are equipped to play at a faster pace and that Dragic’s ability to attack will make things easier for him on the court.