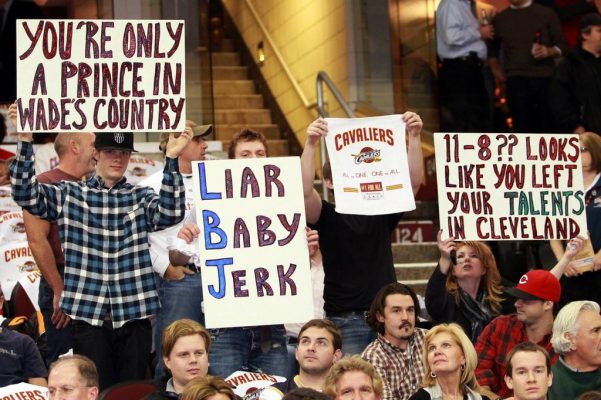 34-year old Chris Bosh has seen his fair share of hostile environments in the NBA, but none compare to LeBron James’ first return game with the Miami Heat against the Cleveland Cavaliers.

“Man, that was — I’ll be honest — that was one of those games I was most afraid of to play in,” stated Bosh as he recalled that night in December 2010. “The only time I was afraid playing basketball was when I was in the eighth grade and we had a fight with another team in a tournament and we had to go back to play them. But the Cleveland game, there was tension. That’s the most I’ll say. There was tension, but we got out of there alive.

“There were moments during our run — Game 6 in Boston [in 2012] of course — but that game was definitely something very difficult to deal with at the time because people in Cleveland, they let us know how disappointed they were,” Bosh continued. “Even to the point where I got some backlash. I was like, ‘Damn! I didn’t even play here!’ They were calling me a traitor. I was like, ‘Damn.’

“Shit, it better not be,” said James referring to the possible negative reaction he’ll receive from Cleveland fans on Wednesday.

“And personally I’m in a whole different space than I was in 2010, so shit doesn’t bother me.”

If James continues his trend of dominating performances against former teams, Cleveland fans may be in for a long night.
[xyz-ihs snippet=”HN-300×250-TextnImage”]