Chris Bosh Calls Justise Winslow ‘One of Those Mutant Babies’ 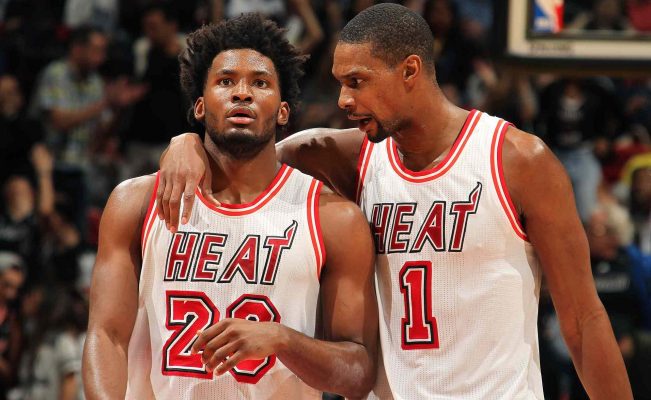 Justise Winslow is finally having a breakout season for the Miami Heat and Chris Bosh has an interesting way of describing Winslow. Bosh spoke with Fox Sports Sun about the Heat’s new starting point guard.

“He’s one of those mutant babies,” Bosh joked. “He probably fell in a pool of what the X-Men fell in, that green goo or whatever.”

That’s an interesting way to describe Winslow’s game, but the metaphor works. Winslow has been taking over primary point guard duties while Goran Dragic recovers from knee surgery. The 6-foot-7 Winslow doesn’t look like a prototypical point guard, but he’s well suited for the role.

Winslow is averaging a career-high 3.7 assists per game this season. Over his last five games, that number has jumped up to 4.8 per game. Winslow’s comfortable with the ball in his hands and Bosh envisioned this being the type of player the Duke University product would become.

“This was always the vision that I had for him after watching him at Duke at such a young age be a perimeter ballhandler,” Bosh said. “My favorite was when he was in the open court. And I figured that’s what he would bring to this organization eventually. And I think now it’s just him learning and getting more comfortable in the league and growing up and actually getting more chin hairs.”

It takes most point guards a few years to really figure out how to excel in the NBA. Of course, Winslow wasn’t always destined to be a point guard, but it appears as though he’s figuring out the position in his fourth year anyway.
[xyz-ihs snippet=”HN-300×250-TextnImage”]