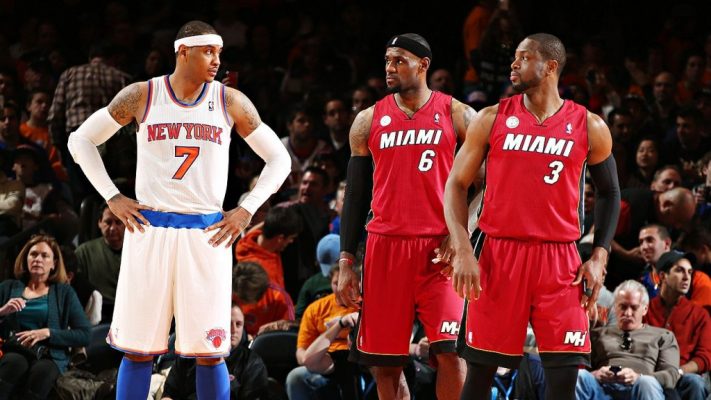 By now, it is common knowledge around the NBA that Carmelo Anthony is close friends with former Miami Heat superstars LeBron James and Dwyane Wade.

Together, they accounted for three of the first five players that were chosen in the 2003 NBA Draft. They went on to become three of the most prominent players in their era of basketball.

Recently, Anthony had a one-on-one interview with ESPN’s Stephen A Smith. In that interview, Smith asked Anthony why he didn’t position himself to become the third star alongside James and Wade on the Heat in 2010.

“Immaturity, growth from that situation,” Anthony said. “From a business standpoint, not understanding where the game was going at that particular time. And still having this street mentality of, ‘I’m not leaving no money on the table.’ I didn’t truly understand there was going to be a lockout and what the lockout meant at point in time. I loved Denver I wanted to be in Denver, I wasn’t ready to leave Denver.”

Smith then inquired further, asking about the conversations he had had with James and Wade leading up to the 2010 offseason.

Anthony signed a five-year contract extension with the Denver Nuggets in 2006, and unlike many other NBA stars’ contracts, his didn’t have an opt-out clause at any point. If it had been structured with an opt-out clause, Anthony could have had the option to opt out and become a free agent in 2010.

As all Heat fans know, Chris Bosh ultimately became the third star on Miami’s Big 3 teams. That trio led Miami to four straight NBA Finals appearances and two championships. As for Anthony, he’s never even competed in an NBA Finals.

After a fruitless 10-game stint with the Houston Rockets in which he averaged 13.4 points per game while shooting only 40.5 percent from the field last season, Anthony remains unsigned less than two months from the start of training camp.