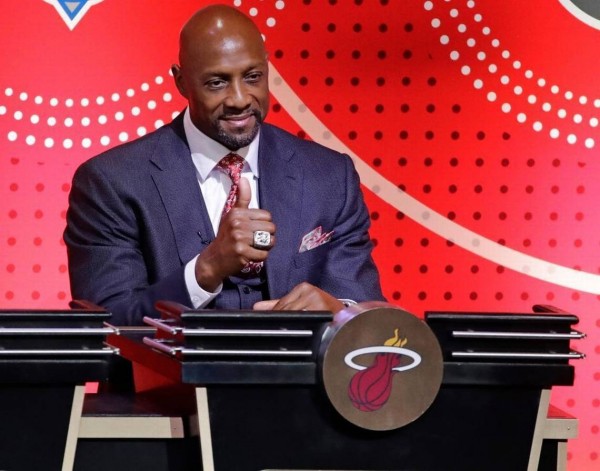 Former Miami Heat center Alonzo Mourning is confident that any rookie that’s signed by the team will be the beneficiary of a unique atmosphere that will allow him to fully develop his potential.

Mourning, a team executive, served as the team’s representative during Tuesday night’s NBA Draft Lottery. Even though the Heat failed to gain any ground from their predestined 14th spot for the draft, he’s enthusiastic about that currently unknown player:

“Whoever comes here, he’ll be better off as a pro,” Mourning said. “With our developmental program, it’s huge. Knowing that the draft is pretty abundant this year and trusting our developmental process here — the coaching staff, the front office. — whatever pick we get, I knew that regardless, having a young, talented player, having him here, he will be better off here.

“It’s just based on what we have to offer, our developmental program. So I think he’s going to be a huge asset to our organization.”

Ira Winderman of the Sun Sentinel noted the past success the team has enjoyed with players who weren’t lottery selections or even drafted. In the latter category, players like Tyler Johnson and Rodney McGruder immediately come to mind as prime examples.

“I think we’re going to get a great pick at No. 14 and he’s going to come in and he’s going to abide by the Heat culture,” McGruder said. “Basically, when you make it to the NBA, where you were drafted at really doesn’t matter. What matters really is the work that you put in once you get here. So wherever he gets picked, at fourteen, that doesn’t have anything to do with his success that’s going to happen in the NBA. So he just has to approach the game and abide to the Heat culture, and I’m sure that he will excel.

While critics might dismiss such comments because both Mourning and McGruder are part of the Heat organization, Winderman indicated that this attitude goes far beyond the South Florida region:

“An agent with a leading prospect in the draft confided privately prior to the lottery that he would prefer nothing better than to be able to steer his neophyte client to the Heat.”

Miami currently only has that first-round selection for the June 22 draft, with their second-round pick (No. 46 overall) having been dealt to the Atlanta Hawks in 2013 in exchange for the rights to James Ennis. Atlanta dealt that pick to the Philadelphia 76ers during the trade deadline this past February.
[xyz-ihs snippet=”Responsive-ImagenText”]