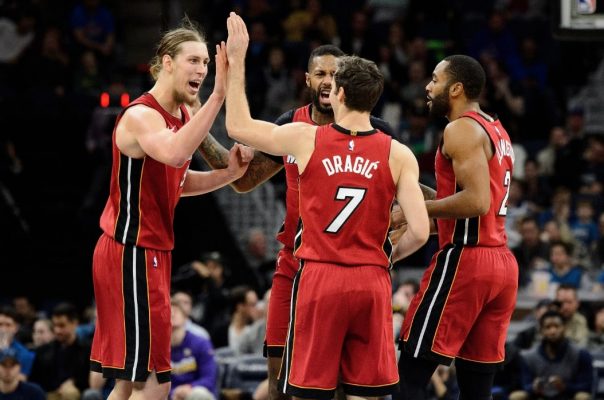 Four members of the Miami Heat cracked Sports Illustrated‘s Top 100 NBA Players of 2019 list, while Dwyane Wade was snubbed for the first time in his 15-year career.

Kelly Olynyk, James Johnson, Josh Richardson, and Goran Dragic all made the 2019 list, while Dragic was the only player to crack the top 50.

Sports Illustrated described Olynyk’s running style as closely resembling “that of a giraffe” but added that the Heat “played its best basketball last season” with the 7-footer on the floor.

He averaged 10.8 points, 4.9 rebounds, and 3.8 assists over 26 minutes per game last year. The 6-foot-9 forward is expected to exceed those numbers after having surgery to repair the hernia in the offseason.

Richardson, 24, is ranked No. 71 on the list after playing his first full season in his third year in South Beach. The young swingman averaged 12.9 points per game last year while nailing an impressive 37.8 percent of his three-point shots.

“His defense makes even the simplest parts of basketball into something arduous,” Sports Illustrated’s glowing write-up said. “No matter where you go on the floor or how you choose to operate, Richardson will be all over you, bodying up and swiping at every turn. Many defenders could manage that for minutes at a time, but what separates Richardson is his endurance. You may tire out, but he never seems to.”

Dragic, 32, was the highest-ranked Heat player at No. 45, following his first All-Star campaign. The Slovenian Dragon averaged 17.3 points, 4.8 assists, and a career-high 4.1 rebounds per game while nailing 37 percent of his shots from downtown.

Sports Illustrated notes that two of the main aspects of the guard’s game are harder to quantify:

“The first is his fight, which is exceptional even in a competitive league. Dragić is a feisty sort who will never hesitate to drive into traffic, even after his face has swollen to cartoonish extremes. The other is his all-around competence—faint praise, perhaps, but the kind that makes the NBA go.”

Meanwhile, Wade failed to make the list for the first time in his illustrious NBA career.

The 36-year-old finished the season averaging a career-low 11.4 points while splitting time between Miami and the Cleveland Cavaliers, and saw his shooting percentage, assists, and steals fall to the lowest rate of his career.

Wade is reportedly deciding on whether to return to the Heat or retire.
[xyz-ihs snippet=”HN-300×250-TextnImage”]