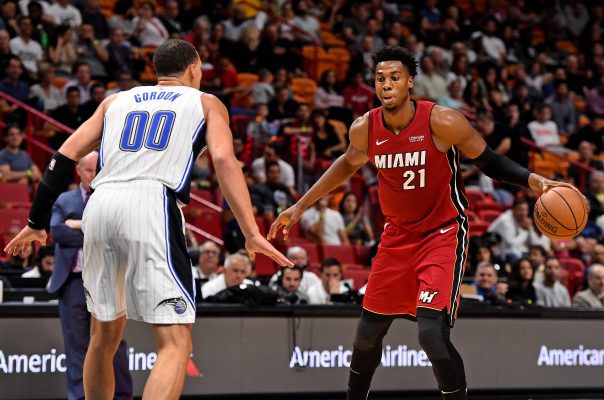 With the clock winding down during a loss against the Orlando Magic Friday night, Miami Heat center Hassan Whiteside apparently decided that there was no reason for him to stay on the team’s bench.

Hassan Whiteside left the Heat bench and walked to the locker room with 40.5 seconds remaining tonight. He was 6-6 in the first half, 0-1 in the second half, and a bad night got even more combustible.

LOL Hassan Whiteside got fed up and bounced. went into the locker room before the game was over pic.twitter.com/t1PiYUEfXf

In the video, Whiteside leaves the court, obviously disgusted. Meanwhile, his coaches stare in disbelief at his early exit.

Whiteside and the Heat had started the last game of their homestand full of the fiery grit the team is known for. The seventh-year center had been a spark, shooting 6-of-6 in the first half and terrorizing the Magic on defense. He finished the game with three blocks and nine rebounds.

The Heat went into the locker room ahead 50-46.

The second half was a different story. The Heat offense sputtered, managing only 12 points to the Magic’s 30. To this paltry total, Whiteside contributed a single field goal. The lead quickly disappeared, never to be seriously challenged again.

Whiteside spent the entire fourth quarter on the bench. Well, almost all of it.

While Whiteside has started many games this season, Heat head coach Erick Spoelstra has seldom allowed him to finish them. This night was no different, and apparently, Whiteside decided that he had had enough.

During his postgame press conference, Spoelstra admitted that Whiteside had not communicated with him the reason behind his early departure.

“He’s probably extremely upset like we all are,” Spoelstra said.

The Heat begin a six-game road trip against the Phoenix Suns on Friday.
[xyz-ihs snippet=”HN-300×250-TextnImage”]