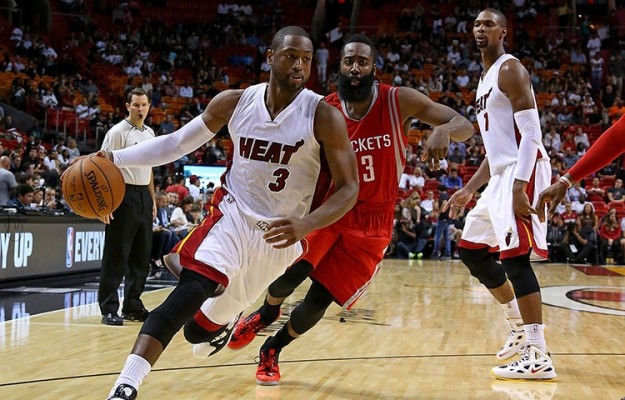 (Miami, FL) — With questions abound as to whether the Dwyane Wade of old could return to spark a new-look Miami Heat into the regular season, “Flash” may have delivered 29 minutes of answers to critics. Behind a game-high 26 points and a game-clinching turnaround jumper with 35 seconds remaining, Wade silenced some doubters with a resurgent offensive effort as the Heat held off the Houston Rockets 90-85 for its third straight preseason victory after an 0-4 start.

Wade, who had 26 total points in his last two preseason games, came out firing from tipoff, going 3-for-3 in the first quarter for six points and two assists. The multiple-time All-Star then turned his offense up a notch in the second quarter, despite the Heat trailing by as much as 13, scoring 11 as the Rockets held an 11-point lead at halftime.

Following swiftly behind Wade with equal prowess and intensity was Chris Bosh, whose inside-out game led to nine points, three rebounds and two assists at the half. Bosh’s eight points in the third quarter – coupled with a coming-out party by backup shooting guard Mario Chalmers – pulled the score close by the end of the third quarter, with the Heat leading 70-69.

Chalmers, relegated to the bench in favor of Norris Cole for the fourth time this preseason, gave Head Coach Erik Spoelstra some serious thinking to do with the starting point guard position, as he scored eight of his 13 points in the quarter – highlighted by a gargantuan block of power forward Donatas Motiejunas’ hook shot attempt with 1:07 remaining in the frame. Chalmers capped his big quarter with a shot clock buzzer-beating fade-away three-pointer with 27 seconds left to give the Heat its first lead of the contest since the middle of the first quarter.

After being dominated by Dwight Howard (19 points, nine rebounds) and the rest of the Houston big men on the glass throughout the game’s first three quarters, the Heat amped up its aggression in the paint with six of its nine offensive rebounds during the final 12 minutes.

Enter Wade, who scored seven points over the final 5:24 to pull the Heat away from a 79-79 tie, capped by his turnaround dagger to push the Miami lead to five during the game’s final minute. Shooting 11-for-17 for the game (including a commendable effort towards his three-point shot with a 1-for-4 clip) with six assists, Wade appeared to be back in rare form, spinning and attacking swiftly with almost no signs of dead legs in 29 minutes on the floor. As he continues to progress back into an alpha male role with this new Heat lineup, Wade could only acknowledge that time and understanding between teammates will be demanded of this group in order to stake claim for Eastern Conference title contention.

“It’s been something we’ve had to come in with a lot of patience,” Wade said of the post-LeBron Heat. “I’m trying to figure it all out just like everyone else. I’m just trying to get better every day.”

Bosh finished with a versatile 22 points on 7-12 shooting, adding six rebounds and three assists while shooting 2-for-4 from beyond the arc. While starter Norris Cole continued his decline with seven points and four fouls in only 14 minutes. Chalmers certainly made his mark with three assists and four steals to go with his 13 points in 33 minutes of play. Rookie Shabazz Napier, coming off a team-leading 25 points in Saturday night’s win over the San Antonio Spurs, was held scoreless for the first time this preseason, shooting seven blanks with three rebounds and two assists in 21 minutes. Chris Andersen crashed the boards with seven rebounds, along with six points to spark the Heat’s bench. James Ennis, who played only three minutes Saturday in San Antonio, was held out of tonight’s game – along with Shannon Brown – due to rest.

Spoelstra, while still in evaluation mode of the team’s rotation and identity, was pleased with the Heat’s will to not only bounce back into this game for the win, but also into this preseason with a 3-4 mark, as a trip to Memphis for a preseason finale against the Grizzlies awaits this Friday.

“We want to keep on pushing forward; we have a lot of work to do with this team,” Spoelstra said. “Our guys understand that.”

James Harden finished with 19 points on 5-for-10 shooting (4-for-7 from three) for the Rockets.

The Heat will play the Memphis Grizzlies Friday night at 8:00 p.m. Eastern time to wrap up the preseason. Miami hosts the Washington Wizards on Wednesday, October 29 in the regular season opener.