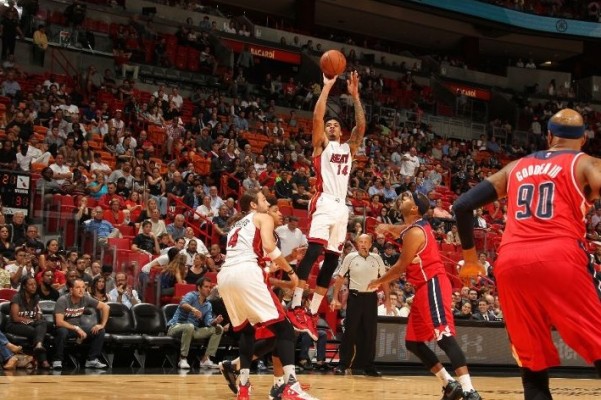 (Miami, FL) – Gerald Green’s 28 points and a fourth quarter push helped the Miami Heat close out the home portion of their preseason schedule with a 110-105 victory over the Washington Wizards at America Airlines Arena.

Washington held a 10-point lead at 90-80 with 9:35 to go, but just like they had during the second quarter, the Heat slowly whittled their deficit down, courtesy of a 16-5 run to take a 96-95 lead. Green drilled consecutive threes to close out that push, part of an 11-point fourth quarter for the new addition.

In the final minute, the Wizards then took a 105-104 lead, only to see Dwyane Wade take it back for Miami on a jumper with 40.8 seconds left. Then, after a three-point miss by rookie Kelly Oubre, Wade grabbed the rebound, was fouled and converted both free throws.

Another Wizard miss allowed Green to haul in the rebound before he was fouled and then notch the final points of the game on two more free throws with 13.2 seconds left.

The Heat’s bench outscored their opponents by a 67-30 count, but the team’s head coach Erik Spoelstra, wasn’t concerned about the status of the starting lineup:

“They just need more time,” said Spoelstra. “The communication on the court was the best I’ve seen during the preseason.”

In the third quarter, Washington put together a 15-2 run to take a 74-62 lead over the first eight minutes of action. With the Wizards leading 81-68 late in the stanza, Miami managed to cobble together four free throws to make it an 81-72 advantage for the opposing team after three.

Contrasting quarters marked the first half, with frigid first quarter shooting putting the Heat in a huge hole. Miami managed to connect of just six of their 25 shots in the quarter. The team’s starting backcourt of Wade and Goran Dragic failed to hit on any of their eight outside attempts

At the start. Miami fell quickly behind as a 6-4 deficit soon saw the Wizards go on a 14-2 run, with Washington twice holding leads of 16, the last at 27-11 with 2:04 left in the first. Washington showed good ball movement in the opening 12 minutes, dishing out nine assists. Kris Humphries was the unlikely first quarter standout for the Wizards, scoring 12 points and grabbing six rebounds, including two from long range to give his team a 29-17 lead.

Just after the second quarter began, Washington moved their lead up to 14, but from that point, the Heat began to slice away their deficit. The big push came in the final three minutes before intermission, when the Wizards watched their 49-43 lead get wiped out as Miami scored 10 of the final 13 points to take a 53-52 advantage into the locker room.

Miami closes out the preseason with a Friday night matchup in New Orleans against the Pelicans, with tip-off set for just after 8 p.m. From there, the Heat will prepare for the regular season opener on October 28 at home against the Charlotte Hornets.
[xyz-ihs snippet=”Responsive-Ad”]