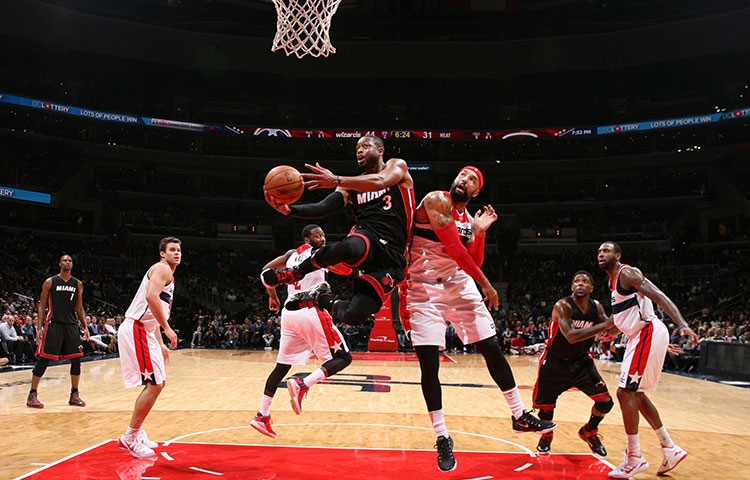 (Washington, D.C.) — The Miami Heat (9-8) traveled to the nation’s capital for a dramatic Eastern Conference showdown against the (11-5) Washington Wizards, where they suffered a miserable one-sided loss, 107-86.

After a stunning victory against the New York Knicks last night, the Heat were hopeful going into tonight’s matchup. The fast-paced game marked the return of team hero Dwyane Wade, who scored 13 points in the fourth quarter alone, and 27 overall.  “He makes things easier on the court,” said center Chris Bosh of Wade’s much needed return from the bench. Although Wade played a total of 32 minutes in the Knicks game and mentioned to coach Erik Spoelstra that it felt closer to 52 minutes, the point guard expressed his enthusiasm to be back for his second game since his injury:

Unfortunately, selfishness during the fourth quarter wasn’t enough to save the Heat from a brutal smack down delivered by the Eastern Conference’s number one team, the Washington Wizards. The third-ranked Heat struggled to keep up with the Wizards from the get-go, failing to take the lead at any point during the painful blowout, for the first time since they played the Atlanta Hawks.

Bosh and Wade both played amazing games, shooting 67.7% from the field and scoring 21 and 20 points, respectively, but the rest of the team only shot 33.3% from the field. The two leaders were essentially alone on the court, as the only other player who was able to put up double digits was Mario Chalmers with 11 on the night. Wade was able to put an end to the Wizards’ 13 point stretch in the fourth, but it just wasn’t enough to close the gap and retrieve the points from their deficit, which dipped to 25 points during the fourth quarter, a season low for the Heat. “We tried to grind through it,” Spoelstra noted, “Easy buckets went the other way. You try to self-will it, but we were playing from double digits the entire night…to win against a quality opponent you have to have a quality disposition.”

Rasual Butler played the 700th game of his career and led the Wizards with 23 points scored, but it was superstar John Wall who had everyone talking. The point guard is said to be one of fastest guards in the NBA and he certainly proved his worth with 18 points, 13 assists, and five rebounds, despite sitting out the entire third quarter. “They had us moving,” reflected Wade after the game, “Wall did a great job getting these guys shots.”

Though Bosh and Wade gave it their best efforts, Miami just couldn’t clinch a win from the Wizards, whose ball movement absolutely shamed the Heat’s. Miami couldn’t seem to pass effectively enough, evident by the fact that they only dropped 12 assists on 33 field goals. That, combined with their inability to score free throws from the first quarter on, only disheartened the Heat, who fell short early in the game, allowing the Wizards to grow their lead.

When asked the reason for his team’s poor performance, Bosh made no excuses:

“It’s about just getting the job done. That’s it. We make mistakes…we try adding vocabulary to it…but just get the job done. Go out there and D out. And we’ve been failing to do that. They made some tough shots and we let that deflate us a little bit.  Our offense gets us in trouble too, taking some quick shots, allowing them to get into the open court, and we don’t really grind anybody, making them move side to side. We stay on the perimeter you know, and don’t get easy buckets.”

However, the center seemed hopeful that the team will bounce back later on in the season:

Miami looks to bounce back as they host the Atlanta Hawks on Wednesday night at 7:30 PM E/T on Sun Sports.
[xyz-ihs snippet=”Responsive-Ad”]