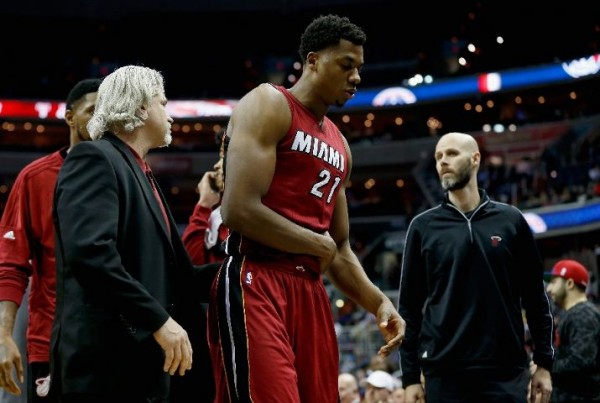 (Washington, DC) – For a team that can’t seem to catch a break lately, the Miami Heat (23-20) added more players to their lengthy list of injuries during a 106-87 loss to the Washington Wizards (20-21) at Verizon Center on Wednesday night.

Six Wizards players scored in double figures on the night, led by 18-point efforts from both point guard John Wall (7-of-14 from the field, 10 assists and four boards) and shooting guard Bradley Beal (7-of-13 from the floor, three rebounds and two assists).

However, luck was not on their side even more so tonight, as Miami suffered two more injuries in their starting lineup. Rising center Hassan Whiteside, who only managed to compile two points and two boards in 11 minutes, left the game halfway through the second quarter with a strained left oblique, as he appeared to suffer a non-contact injury and collapsed to the floor.

To make matters even worse for the Heat, starting small forward Luol Deng (16 points on 5-of-11 shots, eight rebounds and one blocked shot in 36 minutes) got poked in the right eye by Wizards small forward Kelly Oubre Jr. with only 2:25 left in the fourth quarter. Miami was already down 101-79 at the time, so it could not have been more of an unfortunate injury to happen.

According to Jason Lieser, a Miami Heat beat writer for The Palm Beach Post, the extent of Deng’s injury was not pleasant to look at following the game.

All-Star power forward Chris Bosh, who led the Heat in scoring with 18 points and four boards, is looking to move on from this current slump.

“I just look forward to the day off and not really even thinking about basketball,” said Bosh. “Just move away from it as far as possible.”

Miami guard Tyler Johnson, who had to start at point guard on Wednesday night, finished with 14 points and five assists while power forward Amar’e Stoudemire (5-of-6 shots made) had his best game of the season with 11 points and three rebounds.

Up next, the Heat will remain on the road and take on the Toronto Raptors (27-15) on Friday night at Air Canada Centre. The contest, which is scheduled to tip off shortly after 8:00 pm ET, will be broadcast nationally on ESPN.
[xyz-ihs snippet=”Responsive-Ad”]