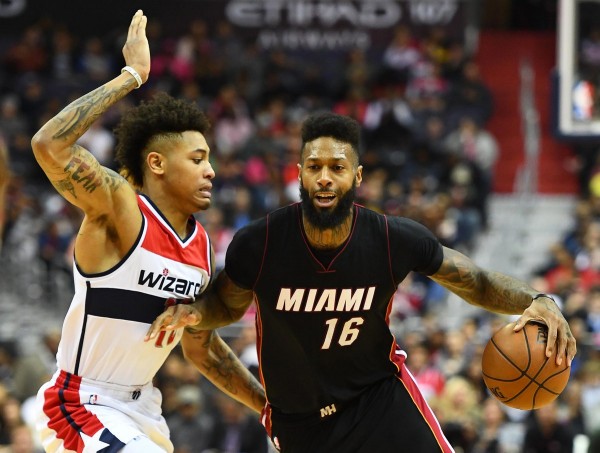 (Washington, DC) –  In their final and most important road game of the regular season, the Miami Heat (39-41) pulled out a nail-biting 106-103 victory over the Washington Wizards (48-32) on Saturday night at Verizon Center.

“This is what our games have felt like the last three months, that everything is just going down to the wire,” Heat head coach Erik Spoelstra said afterwards. “Our guys put it out on the wire every single night. Doesn’t mean it always comes out the way we want to, but our guys don’t have regrets from an effort and connection standpoint. These guys really care about each other and really want to play well for each other.”

Tied at 103 apiece, Miami power forward James Johnson (15 points, 11 rebounds and five assists) made what turned out to be the game-winning layup over Washington power forward Markief Morris with 11 seconds left in regulation, followed by clutch defensive plays by Heat shooting guard Josh Richardson and star center Hassan Whiteside to end the game.

“We’re stubborn. We just play hard. We’re never going to lay down, we’re never going to quit and you’re just going to have to keep playing us until the clock says zero,” Johnson said. “The last play, he (Spoelstra) drew it up and we ran it in Detroit. I had nightmares about that shot I missed, but Darkside (Whiteside) came through and made a game-winning play for us. The miss I forgot about, but today was just being patient. I knew I wanted to give us a chance just in case I missed to get a second opportunity so I went a little bit early, and it worked out.”

“When a three-time NBA champion coach tells you you’re the Defensive Player of the Year, regardless of whatever the votes come out, I believe it,” Whiteside said of Spoelstra’s confidence in him. “He told me that during the timeout. He said, ‘We need a Hassan Whiteside stop, so we need a stop right here, man. You’re Defensive Player of the Year.’ So when a three-time – not one, not two, but three-time NBA coach tells you that, I’m gonna listen.”

In one of his most impressive performances, Whiteside rose to the occasion and led all scorers in his 56th double-double effort of the season with 30 points, 12 rebounds, three blocked shots, two steals and two assists.

As a team, Miami forced Washington to shoot just 8-of-22 from behind the arc and forced them to turn the ball over 19 times on the night. The game was still a back-and-forth battle for most of the night, as the contest had 17 lead changes and was tied 15 times.

For the Heat, shooting guard Tyler Johnson came off the bench for 19 points and four rebounds in 37 minutes of action, while point guard Goran Dragic got off to a slow start in the first half but ended up with 18 points, seven assists, four rebounds and two steals.

The Heat, who have won all three games played against their division rival Wizards so far this season, will play Washington one more time at home on Wednesday in the regular-season finale for both teams.

Washington, who is also jockeying for playoff position, were led by Morris’ 21 points and five rebounds. The Wizards’ star guard tandem of Wall and Beal, who combined to shoot only 11-of-33 from the field, each finished with 16 points.

On Monday night, the Heat will host the defending NBA champion Cleveland Cavaliers (51-28) in a game with massive playoff implications across the entire Eastern Conference. The game is scheduled to tip off shortly after 7:30 p.m. ET at American Airlines Arena and will be broadcast live locally on Fox Sports Sun.
[xyz-ihs snippet=”Responsive-ImagenText”]