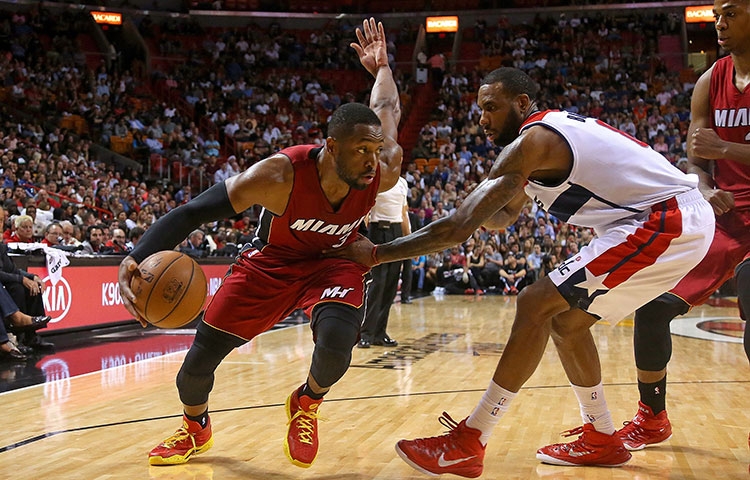 Despite entering the fourth quarter leading 79-76, the Heat were outscored 29-24 in the decisive quarter, losing their second-straight game. It was Miami’s first loss when leading after three quarters (11-1).

In a back-and-forth contest that featured many lead changes, the game was decided by a turnover with five seconds left. After two Bradley Beal free throws boosted Washington’s lead to 103-100, Dwyane Wade had a chance to tie the game for the Heat. Unfortunately, Wade was caught in a double-team trap and turned the ball over as he tried to make a pass to a wide-open Mario Chalmers.

Wade would end up fouling Beal and sending him to the line, where he would go on to hit the next two free throws, thus, cementing the game for the Wizards.

The veteran shooting guard lamented on his turnover in the postgame interview:

“I’m a smarter player than that. I know not to get myself caught on the sidelines at that moment. That’s why I was mad at myself, I should have kept it in the middle knowing they were gonna switch….just gotta be smarter.”

D3 scored 28 points with eight assists, Luol Deng contributed 19 points with five boards, while Chalmers and Udonis Haslem had 14 and 11 points respectively in the loss.

The Wizards were led by Nene Hilario and John Wall’s 20 points. Wall also had 10 assists in the victory, which was Washington’s sixth straight. The Wizards entered Friday night’s action with the second-best record in the Eastern Conference.

The Heat shot a scorching 65 percent from the field through the first half in comparison to the Wizards’ 49 percent clip. In spite of the difference in shooting percentages, Miami led just 55-54 after one half.

This contest between Southeast division rivals featured six total ties and 18 lead changes. The last lead change occurred with a Paul Pierce tip-in with 1:31 remaining in the fourth quarter which gave Washington a 97-95 lead. The Heat would never again regain control of the game despite making a late run in losing their seventh home game in their last eight contests at American Airlines Arena.

Erik Spoelstra was blunt in his assessment of the Heat’s collapse late in the fourth:

“Obviously that was tough. Really it just came down to them making more plays in the end than we did. Both teams had chances at it. The ball went in more often during that last three-or-four minute stretch (for the Wizards) than it did for us.”

Spoelstra also followed up by stating that the loss did hurt due to the effort put forth by the Heat this time around:

“Yeah, it hurts. There wasn’t too much to say to the team. We’ll reconvene and address it as we move forward.”

Seemingly desperate for any sort of boost, Spoelstra inserted Chalmers into the starting lineup for just the ninth time all season long. It was the first time ‘Rio had started since December 5 versus the Milwaukee Bucks. Despite the surprising start, the veteran point guard didn’t provide much of a boost as he posted a -9 in the plus/minus rating department. The man he replaced, Norris Cole, had a -12 plus/minus rating and shot just 3-of-8 with seven points in 31 minutes of playing time.

Speaking of point guards, Shabazz Napier was a healthy scratch. The rookie point guard played 14 minutes in the loss to the Utah Jazz on Wednesday night and 18 minutes versus the Brooklyn Nets on Tuesday after being recalled from the Heat’s D-League affiliate Sioux Falls Skyforce on Monday. It was just the second game all season that Napier had been a scratch.

Hassan Whiteside posted a burst of energy for the Heat when he entered the game with 10:01 remaining in the second quarter. He posted six points on 3-of-3 shooting with seven rebounds, two steals and one block in 16 minutes of action.

The Heat will look to get back on winning track when they take on the Boston Celtics on Sunday night at American Airlines Arena. Tip-off takes place at 6:00 pm EST and the game will be broadcast on Sun Sports.