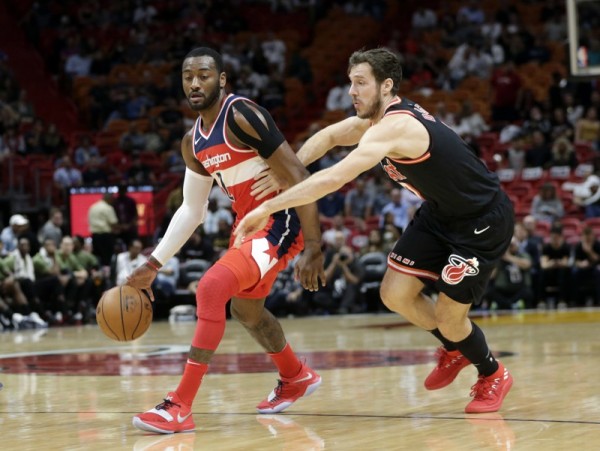 (Miami, FL) – The Miami Heat played their first game at American Airlines Arena in two weeks when they faced off against the Washington Wizards on Wednesday night. While the game seemed to be headed for yet another nail-biter as the Heat faced off against one of the strongest teams in the Eastern Conference, the Wizards were able to close out late in the game to claim an easy victory, 102-93.

Wednesday’s contest was a game of runs. Just when it seemed like the Heat were going to be able to close the deficit, or even increase their advantage, the Wizards were able to turn it on, allowing them to control the game from start to finish.

The Heat’s best chance to take home the win came in the final period as they led by as many as seven early in the quarter. With seven minutes remaining, however, the Wizards reclaimed the lead thanks to two Bradley Beal free throws and never looked back. The Heat were outscored 29-13 in the second half of the final frame en route to their eight loss of the season.

While the Heat showed an ability to stick around with the Wizards at times, the several back-breaking runs that took place throughout the game ended up being the deciding factor in the contest.

“Just like we’ve been saying for a while, that word, to be able to sustain,” head coach Erik Spoelstra said following the loss. “We have some of the best basketball we could play and some of the worst basketball, and it will go back and forth countless time during the course of the game. So, it’s there. It’s neck up for us to be able to develop this mental resiliency and to be able to put our best game out there and sustain it for 48 minutes. … We have these pockets during the course of games where we’re simply inconsistent during those stretches.”

The Wizards started the game off hot offensively, as they have done so all season (second in the NBA with 111.4 PPG). John Wall, who had 27 points, six assists, and four rebounds, and Beal, who had 26 points and  seven rebounds, led their team throughout the game, but every time they seemed to be on the verge of putting the game out of reach, the Heat found a way to claw back. The Heat were able to keep it close early in the first quarter thanks to Hassan Whiteside, who had eight in the period and 14 points and 21 rebounds in the game. However, the Wizards went on an 11-0 run to end the period, 30-19.

The Heat fought to get themselves back in the game in the second quarter. Thanks to Tyler Johnson, who scored 13 of his 15 points in the period, the Heat found themselves down eight with just over four minutes left in the half.

Moments later, Justise Winslow made a 25-foot 3-pointer, but just when it seemed like the Heat were going to be able to close the gap before the half, the Wizards took control once again. Just like in the final minutes of the first quarter, Washington put their offensive ability on display to close out the half on an impressive 11-4 run to control the game, 61-49, at the half.

It wasn’t until the third quarter that the Heat were finally able to make their move. They opened the quarter on a 12-1 run, led primarily by Dion Waiters, who finished his night with 19 points and five assists. With 2:20 remaining in the quarter, the Heat claimed their first lead of the game after Goran Dragic hit a three-point shot to put the Heat up 72-71. The Heat were able to hold onto the lead into the final frame, but once again the Wizards’ offensive ability proved too much to keep up with.

While the Heat fought to keep it competitive until the very end, the Wizards proved why they are the class of the Eastern Conference in a game that was much harder fought than the final score indicated.

The Heat will look to avenge their loss against the Wizards in the next game when they travel to Washington, D.C. to face off against the 9-5 Wizards on Nov. 17.
[xyz-ihs snippet=”Responsive-ImagenText”]