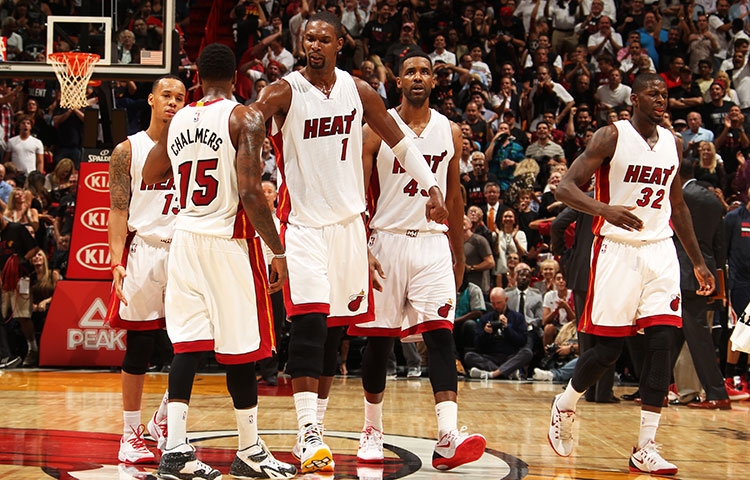 (Miami, FL)—The Miami Heat officially christened a new era with the team’s 27th season opener against what will undoubtedly be one of the tougher opponents they’ll face in the 2014-15 season in the Washington Wizards.

Miami opened its first possession with an electrifying flurry of pinpoint passes from side to side, and with two seconds left, Chris Bosh splashed a three-pointer (initially ruled a two-pointer) from the right corner to beat the shot clock.

The Wiz quickly responded, however, as Paul Pierce matched Bosh’s first strike with a long distance strike of his own. Despite great opportunities from the field, Miami failed to convert on six of its seven initial shot attempts and missed all six shot attempts from beyond the three-point line midway through the first quarter.

Despite the rough start from deep, Miami went on to connect on its next pair of three-point attempts to tie the game with less than four minutes left in the first; however, despite the brief barrage, Miami would find itself down six points at the end of the opening quarter.

Norris Cole had a fantastic starting quarter as he notched eight points, and Luol Deng was right behind him with six early points off of great cuts and off-ball movement, however Deng did leave the game briefly with a strained foot before the start of the second quarter.

The Heat never faltered thanks to timely scoring from Bosh in the second quarter, and with eight and a half minutes left in the first half, Miami tied the game once again off of tough interior post moves by Bosh. After settling for lots of perimeter looks last season, Bosh was extremely aggressive in the paint and did most of his damage off of face-up drives to the rim, and led all players in the first half with a near double-double, tallying 19 points and nine boards. On Washington’s end, three players were in double figures as Drew Gooden, Paul Pierce, and Marcin Gortat scored 13, 11, and 10 points respectively. At halftime, the Heat clung to a one point lead after outscoring the Wizards 31 to 24.

After going scoreless in the third quarter, Bosh helped propel Miami to a four point lead over the Wizards with five straight points off of hard-nosed offense with under nine minutes to play. Heat rookie James Ennis slammed in a vicious one-handed dunk to draw a foul on Rasual Butler, and from there, the momentum shift was almost palpable as the roar of the American Airlines Arena crowd served as the death knell for the Wizards’ comeback hopes.

Ennis and fellow rookie Shabazz Napier finished with a combined seven points, but veterans like CB were still impressed with their activity in key situations.

“You have to give a lot of credit to our rooks. They showed great poise, and they gave us enough to get the job done.”

Despite only tallying one basket, Napier converted a key turnover into a basket on the other end off of a John Wall mishandle, and it came at a time when the Heat needed big plays to seal the deal. Even head coach Erik Spoelstra echoed Bosh’s sentiment.

“Both of those guys showed great poise down the stretch and it was good to see.”

As the Heat lead nearly surged to double digits, Wizards youngster Otto Porter sunk two timely floaters to quell what appeared to be an ensuing avalanche of Miami points. The Wizards kept battling, and they gradually trimmed the Heat lead to four points with under three minutes to play in the game’s final quarter. 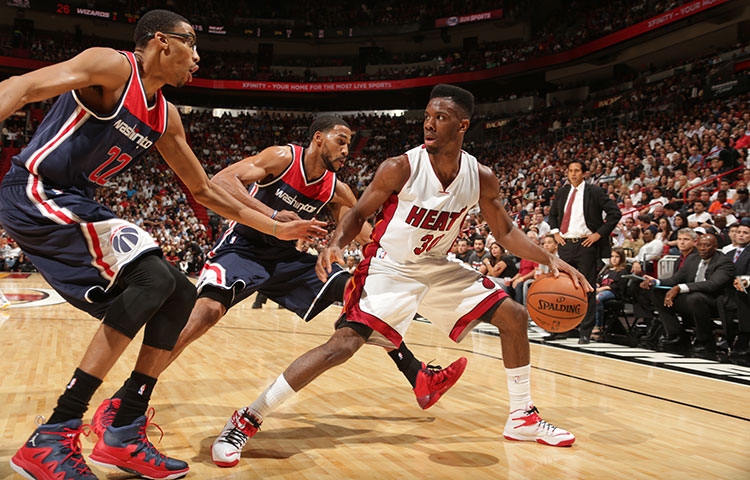 As the Wiz seemed to still have a heartbeat, Norris Cole blasted the Wizards with a deep three-point dagger to give Miami a seven point lead and ended up finishing with career-high 23 points. Yet another fatal blow was dealt with one minute left as Dwyane Wade sunk a three-pointer to give Miami an 11-point lead, and after fouling Otto Porter to allow two garbage-time points for Washington, Wade padded his stats yet again with another pull-up three-pointer over Wall to cement a 12-point win for Miami. After a calf contusion sent Wade out of action in the heat of the contest, he finished with 21 points, including 12 in the fourth quarter, in a triumphant return.

Miami finished with 32-percent three-point shooting on 28 attempts and successfully out-rebounded the Wizards by eight total boards. Neither team played stellar defense throughout, but it was Miami’s lockdown focus late in the game that sealed the deal as both squads shot a virtually identical 48-percent from the field for the entire contest.

In a game that featured sixteen ties and sixteen lead changes, Chris Bosh was just happy to get the victory.

“I’m just happy to be playing basketball,” Bosh said in the postgame to Sun Sports’ Jason Jackson. “We have so much going for ourselves. Doesn’t matter how we do it. I’m proud of our guys for sticking it out.”

Although morale is sky high after the win, Bosh emphasizes there is still a lot basketball to be played.

“It’s just one game. It’s a marathon, and we’re looking forward to get it going on.”

The Heat’s marathon continues this Saturday as Miami travels to Bankers Life Fieldhouse to take on the Philadelphia 76ers.

*Notes: Washington would take on Miami without two key players due to suspension, Nene and Dejuan Blair. Without Nene, Washington was missing a major component of their halfcourt offense, and it forced a start for veteran pivot Dwight Gooden alongside starting center Marcin Gortat. Aside from suspensions, injuries would leave Washington without swingman Martell Webster and budding star Bradley Beal. For Miami, newly acquired forward Josh McRoberts missed the opener with a toe injury.
[xyz-ihs snippet=”Responsive-Ad”]