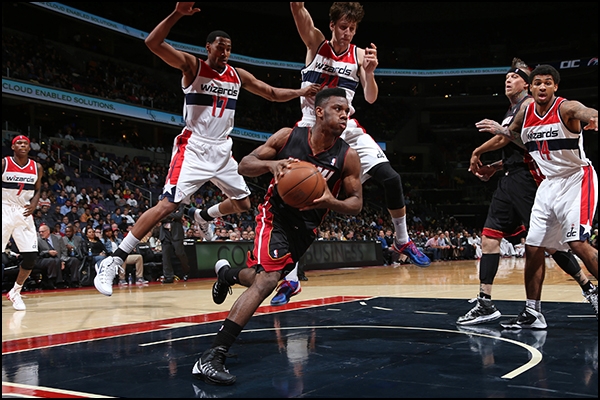 (Miami, FL) — The Miami Heat (0-0) begin their first regular season game in the post-LeBron James era at home against the Washington Wizards (0-0) on Wednesday, October 29 at 7:30pm EST.

While many are already saying Miami is destined for a sharp decline in their Eastern Conference prowess, center Chris Bosh is optimistic where the team is headed. “I’m excited to hit the ground running,” he articulated after Monday’s practice.

John Wall’s Washington Wizards are expected to perform at a high level after nearly earning a trip to the Conference finals in the 2014 NBA playoffs, so Miami will see its first test on opening night. With the off-season acquisition of former Brooklyn Net Paul Pierce, Washington has added some veteran leadership to a young squad that already has playoff experience.

Bosh and Dwyane Wade are expected to take expanded leadership roles of their own in the absence of the game’s greatest superstar. Bosh did not mention the Wizards directly on Monday, but did hint at the strength of two other Eastern conference powerhouses.

“Chemistry-wise Chicago’s ahead. Talent-wise, Cleveland is ahead.”

Bosh’s relationship with his former teammate, James, has withered away this off-season. Earlier in October, Bosh told reporters that he hasn’t spoken with James since his decision to leave Miami.

“If guys aren’t in this locker room, I don’t have much time for them – if any.”

This chip-on-the-shoulder mentality could lead to a career year from the 30-year-old Dallas native who, this off-season, turned down a chance to play alongside Dwight Howard of the Houston Rockets. With an expanded role in the offense, Bosh could surprise pundits and come surprisingly close to 50-40-90 shooting numbers in 2014-15. Head Coach Erik Spoelstra will certainly be challenged as a head coach to create an offense with effective and efficient ways to score.

“We haven’t been making as many threes as we have in the past, but that doesn’t make us any better or worse,” Spoelstra said at practice on Monday.

Miami certainly does not have three-point specialists like they have had in previous years. They have seen the departure of three-point specialists like 2012 Finals Game 5 hero, Mike Miller, who hit 7 of 8 threes in the game that won Miami the championship, and 2013 NBA Finals Game 6 hero, Ray Allen. Grantland’s Bill Simmons wrote earlier this year that there has never been a greater NBA shot than Ray Allen’s Game 6 three that sent the game to overtime.

“Hopefully we find a real consistency with how we want to play and get guys comfortable in their roles,” Spoelstra said on Monday. “We’re going to have to play Norris [Cole] and [Mario Chalmers] quite a few minutes and I want them playing aggressively and confidently. I want them continue to get more comfortable leading the team.”

Washington was the eighth-best defense last season, giving up less than 100 points per game to opponents. With Marcin Gortat and Nene clogging up the paint, and outside perimeter defender, Trevor Ariza lurking, Spoelstra will get early feedback as to whether or not his offensive game-planning is effective with this new roster.

The addition of Luol Deng, a fan-favorite during his tenure with the Chicago Bulls, will be one to monitor closely as the season progresses. A career 16.0 PPG,  6.3 RPG, and 2.5 APG player, Deng is one of the league’s most well-rounded perimeter players. “[Deng is] a hard player, one of the best cutters in the league,” Bosh told the Miami Herald. “He makes the game a lot easier for a lot of guys just based off of his length, his talent.”

Bosh knows his team is fighting an uphill battle, but also left some room for optimism on Monday. “I think we have the chance to be a very, very good team.”
[xyz-ihs snippet=”Responsive-Ad”]