Heat vs. Wizards Game Preview: Heat Look To Shape Up At Home 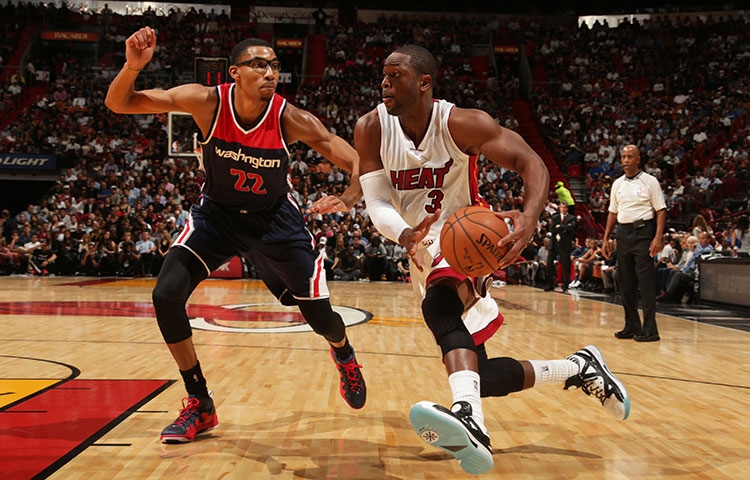 As it is, the superstar guard’s 42 points, four rebounds and three assists against the Utah Jazz Wednesday night were not enough to put a halt to the Heat’s four-game losing streak at home.

“I felt I could do things on the floor (that) I wanted to do. Obviously with Chris (Bosh) out, I’ve got to be a lot more aggressive. We’ve got to put points on the board if we’re going to win ballgames,” Wade told reporters after the game.

The Heat’s All-Star starting center Chris Bosh is out indefinitely with a calf strain. Coach Erik Spoelstra believes the adversity the Heat are dealing with now could result in a stronger team down the road.

“I told the guys that there will be brighter days. We have an opportunity to get better as a group; there’s a lot of things still to look forward to. To get through this time, grind through it…as we start to get a full complement of our players, now you have the habits that you’ve built up through the tough times,” he told the media after Monday’s practice in Miami.

Spoelstra added, “When you go through tough times in this league, and you’re able to collectively find a way to come out of it more connected, that helps you. It doesn’t make it any easier, but it can be an opportunity to grow as a team.”

Wade’s strong showing against the Jazz came on the heels of the 28 points, five rebounds and four assists he put up in a road victory over the Brooklyn Nets the previous night while dealing with a stomach virus.

“I’m feeling better tonight than I did last night. I felt explosive,” said Wade, who also dealt with a hamstring injury earlier this season.

Point guard Mario Chalmers was the only other Heat player to score in double-digits against Utah, although his 11 points came on 3-13 shooting. The Heat shot below 40 percent as a team for the game.

Wade is maintaining a positive attitude despite the Heat’s injury woes and recent up-and-down play, “I’m patient, we all have to be patient…hopefully we can get on a roll here at home. We’ve got to make the best with what we have.”

The 105-87 loss to the Jazz dropped the Heat seven games behind the Wizards in the division.

Washington comes to South Beach well-rested and on a roll.

The Wizards beat the Minnesota Timberwolves Tuesday night at home for their fifth consecutive win.

Led by the dynamic young backcourt of John Wall and Bradley Beal, the Wizards currently sport the second-best record in the Eastern Conference.

Wall scored 21 points and handed out 17 assists in Washington’s 109-95 victory over the Timberwolves. Following the game, Wall told reporters that he is off to the best season of his five-year career:

“This is probably the best I’ve played since I’ve been in the NBA. My confidence, the way I’ve been playing, it’s totally different than it was my first two years. It just came (through) a lot of hard work and dedication.”

Washington head coach Randy Wittman disagrees with his star point guard, however. When asked by a reporter whether he thinks Wall is peaking as a player, Wittman said the fifth-year veteran still has room to grow:

“No, I think he’s still got the best ahead of him. I want him to keep driving. I don’t want him to take the foot off the pedal…(I’ve told him to) keep doing the things you’re doing.”

Wall leads the Wizards in scoring and assists, at 17.8 and 10.6 respectively. Teammate Bradley Beal is second in scoring, averaging 15.1 points per game.

This will be the third matchup between the Heat and the Wizards this season. They split their first two meetings, with each team winning easily on its home court.

Tipoff is set for 7:30 PM EST on Friday at American Airlines Arena. The game will be broadcast on Sun Sports.