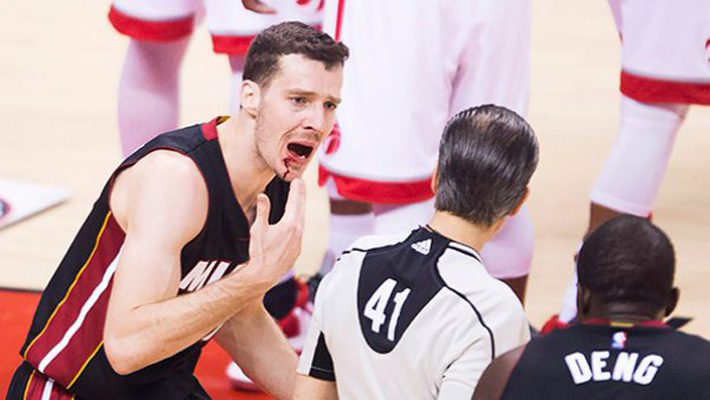 (Toronto, ON) – In yet another nail-biting contest to start off the 2016 Eastern Conference semifinals, the Miami Heat (1-1) couldn’t pull off another overtime thriller as they fell 96-92 to the Toronto Raptors (1-1) on Thursday night at Air Canada Centre.

The Heat couldn’t shake their 11 first-quarter turnovers (21 total on the night) as well as some questionable calls in the fourth quarter and overtime, resulting in the Raptors evening the series up at one game apiece.

“Spotting a good team like this roughly 20 extra possessions, however they got them, that’s tough to overcome,” said Heat head coach Erik Spoelstra in his postgame press conference. “We had our chances. I felt like we started to take control of the game in the fourth quarter. Turnovers, offensive rebounds, free throws…that’s a lot to give up to a good team.”

After Raptors point guard Kyle Lowry (18 points, six assists, four rebounds and three steals on 7-of-22 shooting) hit a clutch pull-up jumper with 14.9 seconds left to give his team an 86-83 lead, Heat point guard Goran Dragic promptly responded in a huge way when his three-pointer tied the game with only 10.5 seconds remaining. Lowry then air-balled a trey of his own at the buzzer, and off again to overtime these teams went.

The Heat didn’t seem to have much of an answer for Valanciunas down the stretch, as the big man had 11 points and seven rebounds in the fourth quarter and overtime alone.

In Miami’s losing effort, Dragic was an absolute warrior. After taking an elbow to the face in the second quarter, which required eight stitches on his lip during halftime to stop the bleeding, the point guard didn’t miss a beat en route to a team-high 20 points, four assists and four boards.

Shooting guard Dwyane Wade and swingman Joe Johnson each had 17 points for the Heat, while center Hassan Whiteside had yet another double-double with 13 points, 13 rebounds, four blocks and three assists. Luol Deng hit a clutch three-pointer in the fourth quarter as well, with the forward adding 12 points and six rebounds of his own.

“I feel like we don’t turn the ball over 20-something times, we’ll be fine,” said the three-time champion Wade. “That limits us a lot. It allows us to see their set defense a lot, so offense has been good enough to this point. It’s nothing about our offense, we just have to do a better job of taking care of the ball.”

Up next, the Heat will head back home to Miami for Game 3 on Saturday night at American Airlines Arena. The contest, which is scheduled to start shortly after 5:00 pm ET, will be broadcast nationally on ESPN.
[xyz-ihs snippet=”Responsive-Ad”]