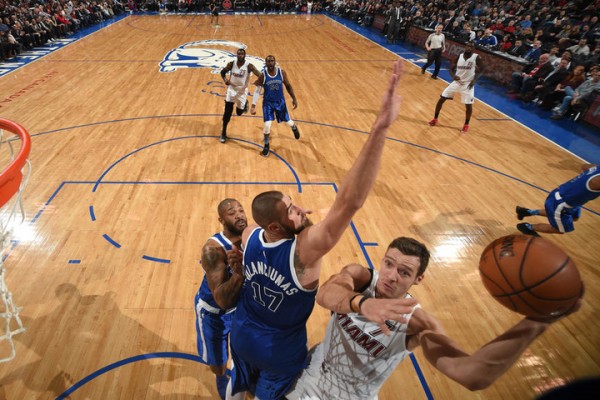 (Toronto, ON) – Despite a valiant comeback effort on the road, the Miami Heat (38-41) and their Eastern Conference playoff hopes took another major blow on Friday night in a 96-94 loss to the Toronto Raptors (49-31) at Air Canada Centre.

“It’s all a challenge. This is the way we’ve been for the last two-and-a-half, three months. We feel like every single game has had the feeling of an elimination game for several straight weeks, so our guys are tough enough to handle this,” Heat head coach Erik Spoelstra said after the game.

The Heat, who trailed for a majority of the contest, were finally able to tie the game up at 82 apiece in the fourth quarter when star center Hassan Whiteside (12 points and 10 rebounds) dunked the ball on an alley-oop.

Whiteside, who managed to play just 27 minutes of action, was in foul trouble for a large portion of the game.

Raptors star shooting guard DeMar DeRozan, who dropped 40 points on the Heat down in Miami last month, had 38 points (14-of-32 shots made from the field) and six rebounds to lead all scorers on Friday night.

“When we get a lead, we’ve got to understand we can’t look at the score,” DeRozan said after the Toronto win. “We’ve still got to treat it like it’s 0-0. We can’t get complacent, at all.”

Toronto All-Star point guard Kyle Lowry, who played in just his second game back since returning from a right wrist surgery, had 12 points (5-of-14 from the floor), seven rebounds and six assists in the win.

Down by as many 18 points in the second quarter, Heat forward James Johnson led the Heat’s comeback attempt with 22 points, 10 rebounds and three assists.

“We love each other. We play together, we lose together and we win together,” Johnson said. “Tonight, we’re just going to sharpen our swords and go back to another battle tomorrow.”

Point guard Goran Dragic finished with 18 points on 6-of-14 shooting, while shooting guards Wayne Ellington and Josh Richardson had 12 and 10 points, respectively.

As a team, Miami struggled to hit their 3-pointers and turned the ball over too many times, going only 8-of-23 from behind the arc and surrendering 19 giveaways to the Raptors.

For Toronto, point guard Cory Joseph came off the bench to score 14 points, while power forward Serge Ibaka tacked on 12 points and nine rebounds on the night.

On Saturday night, the Heat will play their final road game of the regular season when they visit the Washington Wizards (48-31) in a contest they absolutely must win. The game is scheduled to tip off shortly after 7:00 p.m. ET at Verizon Center and will be broadcast live locally on Fox Sports Sun.
[xyz-ihs snippet=”Responsive-ImagenText”]