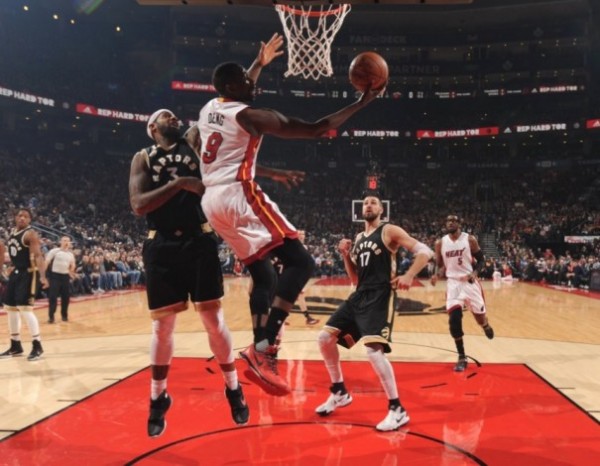 (Toronto, ON) – Despite a clutch three by Luol Deng to send the game into overtime, the Miami Heat’s inability to score in the extra session until it was too late resulted in a 112-104 loss to the Toronto Raptors at Air Canada Centre on Saturday night.

Deng’s long range bomb tied the game at 97 with 3.1 seconds left, with a turnaround jumper by Toronto’s DeMar DeRozan then missing at the buzzer to send the game into overtime. However, once the extra session began, the field-goal shooting woes that otherwise plagued Miami in the fourth quarter resumed.

The Heat were just 3-of-12 (25 percent) in shot attempts during overtime, a percentage that was only slightly better than the woeful 22 percent (4-of-18) during the fourth quarter.

A 23-13 run during the third quarter had changed what looked like a prelude to the Raptors pulling away at 57-48, into a slim 71-70 Miami advantage at the end of the period. Solid ball movement and strong defense helped the Heat during this stretch, with Miami collecting six assists to nearly match their eight up to that point. On the other side, the Raptors managed to hit just 33 percent of their field goal attempts.

Joe Johnson, starting in place of Dwyane Wade, led Miami with 28 points, five assists and four rebounds. Wade sat out the game due to a bruised left thigh.

“I just think he needs rest, more treatment,” Spoelstra said. “It should be able to respond pretty quickly with a lot of that and no extra pounding.”

Rookie Justise Winslow was the only other Heat player to reach double figures, scoring 11 and collecting five rebounds.

The Heat return home for Monday night matchup against the Denver Nuggets, a team they defeated on the road, 98-95, on January 15. Tipoff will take place just after 7:30 p.m. ET.
[xyz-ihs snippet=”Responsive-Ad”]