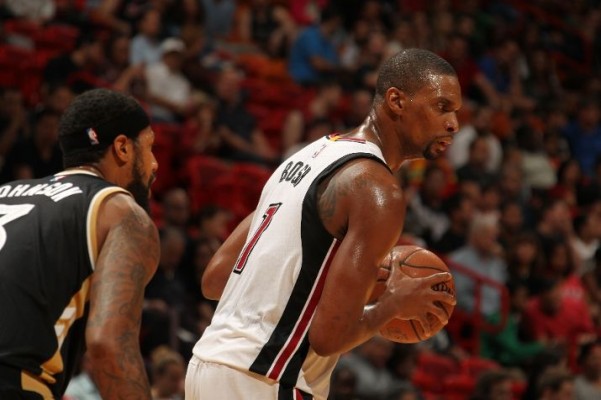 (Miami, FL) – In an attempt to build on their three-game winning streak, the Miami Heat (15-10) fell apart in the second half as the Toronto Raptors (17-11) pulled away late en route to a 108-94 victory over the home team at American Airlines Arena on Friday night.

Miami, who led by a score of 55-50 at halftime, simply couldn’t get anything going on a consistent basis in the second half, allowing All-Star shooting guard DeMar DeRozan and his Raptors to keep the Heat at bay.

Power forward Chris Bosh, who played seven full seasons for Toronto, lost his first ever game (12-0 career record against the Raptors) to his former team on Friday night. The two-time NBA champion had an off game, as Bosh only had 11 points, four rebounds and three assists. However, he did have an impressive posterizing dunk over Raptors power forward Patrick Patterson in the second quarter.

Despite an 11-point lead with 9:33 left in the third quarter, Dwyane Wade (21 points, six rebounds and five assists) had a forgettable night with eight turnovers.

“I had most of my turnovers early in the game,” said Wade. “It wasn’t about my rhythm. We didn’t have enough team rhythm.”

In a complete team effort from Toronto, DeRozan led the way with 30 points (10-of-17 from the floor and 10-of-13 from the free throw line) to go along with four assists, four rebounds and two steals. This was quite the bounce-back victory for the Raptors, who lost on the road in overtime on Thursday night to the Charlotte Hornets.

“Especially from a tough loss like last night in overtime on a back-to-back,” said DeRozan after the game. “You gotta give credit to us, we came in with a lot of energy when we could’ve been tired and we did what we were supposed to do.”

Already without newly-acquired small forward DeMarre Carroll and center Jonas Valunciunas due to injuries, DeRozan and his fellow teammates kept their foot pressed on the gas pedal all night.

“My teammates help me so much,” added DeRozan. “I know I can get in the paint whenever I want and make them better. Once they hit a couple shots, they open up everything for me and I’ll get to the free throw line and just take advantage of everything they give me.”

Up next, the Heat will look to bounce back during their four-game homestand against the Portland Trail Blazers (11-17) on Sunday. The contest, which will tip off shortly after 1:00 pm ET, will be broadcast live locally on Fox Sports Sun.
[xyz-ihs snippet=”Responsive-Ad”]