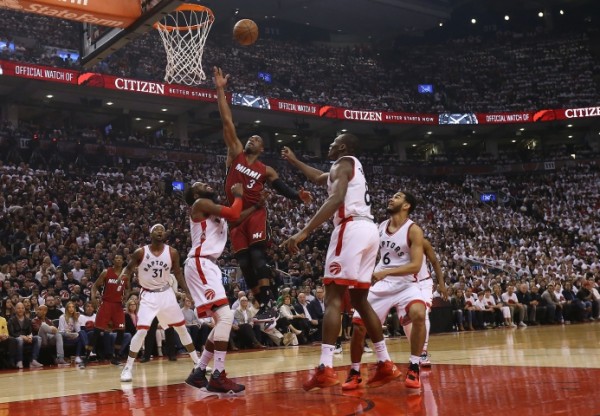 (Toronto, ON) — Game 7, Eastern Conference semifinals, and a hungry Cleveland Cavaliers team waiting for you in the shadows, the Miami Heat gave its blood, sweat and tears in this best-of-seven series.

Although the Heat lost 116-89 at the end of the day, Miami was without its two biggest stars in Chris Bosh and Hassan Whiteside for a majority of the playoffs.

All in all, the season should have been considered a success for a bruised and battered Heat team that many considered would have no shot of reaching the NBA Eastern Conference finals without its main two big men.

However, the Heat fought, battled, and willed its way to a Game 7 and you have to commend them for their effort.

Wade, who carried this Heat team throughout the playoffs, also had this to say after the game:

“We fought tooth and nail to try to get to that goal of getting to the Eastern Conference Finals,” Wade said. “We came up obviously one game short of that. For myself and a lot of guys on this team, there’s not always mother season, another season, so you want to take advantage of the opportunities.”

For the Raptors, point guard Kyle Lowry showed up in a big way as he finished with 35 points, seven rebounds, nine assists, and four steals.

“Their most aggressive, most energetic burst was at the beginning of that fourth quarter and they put it away,” Heat coach Erik Spoelstra said. “They wore us down.”

The Heat now prepare for an offseason where its number one objective is going to be retaining emerging center Hassan Whiteside.
[xyz-ihs snippet=”Responsive-Ad”]