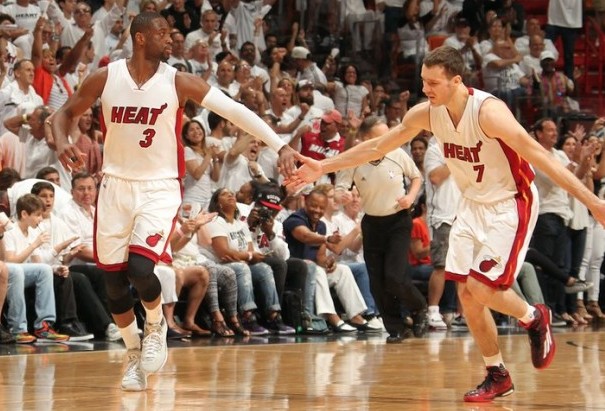 (Miami, FL) – With elimination staring them square in the face, the Miami Heat (3-3) put the pressure right back on the Toronto Raptors (3-3) with an inspiring 103-91 victory in Game 6 of the Eastern Conference semifinals.

“There’s usually not an easy way in a seven-game series,” said Heat head coach Erik Spoelstra. “This is the path.”

Friday night was Heat point guard Goran Dragic’s chance to shine, and that’s just what he did in front of a packed American Airlines Arena to help keep Miami’s season alive. “The Dragon” was unleashed, as he scored a playoff career-high 30 points (12-of-21 shooting), seven rebounds and four assists on the night.

“Goran had a big game for us,” said Heat shooting guard Dwyane Wade after the game. “He really was on the attack all night and I said we needed somebody to have a special game, and he did that for us.”

Wade had a great night of his own, as he passed Houston Rockets great Hakeem Olajuwon for 12th place on the NBA’s all-time playoff scoring list with 3,765 points. The Miami legend had an all-around fantastic night with 22 points, six boards, five assists, three blocks, and two steals.

“I was aggressive early, but it’s all set up for late in the game,” Wade said. “I love the fourth quarter, it’s winning time, and it’s a time to put the ball in my hand to make plays.”

Miami’s starting forwards on the night Joe Johnson and Justise Winslow had 13 and 12 points respectively, while forward Josh McRoberts came off the bench to add 10 points and five rebounds in just over 18 minutes.

Point guard Kyle Lowry scored 36 points (12-of-27 shooting) to go along with four rebounds and three assists for Toronto, while shooting guard DeMar DeRozan added 23 points (8-of-21 from the field) and four rebounds. For the second straight game, Lowry and DeRozan combined for 59 points against the Heat.

However, the two Raptor guards scored almost two-thirds of Toronto’s point total, as their teammates combined to shoot just 14-of-34 from the floor.

As announced on ESPN, the Heat can become the first team in NBA history to win two series in one postseason after being down 3-2.

Unfortunately, according to multiple sources, Heat center Hassan Whiteside will not play in the pivotal Game 7 but will travel with the team.

Hassan Whiteside talking to media. Says he is rehabbing and getting better. “I don’t really have a timetable for you.”

Up next, it’s win or go home for both teams in Game 7 on Sunday afternoon. The contest, which is scheduled to tip off shortly after 3:30 pm ET at Air Canada Centre, will be broadcast nationally on ABC.
[xyz-ihs snippet=”Responsive-Ad”]