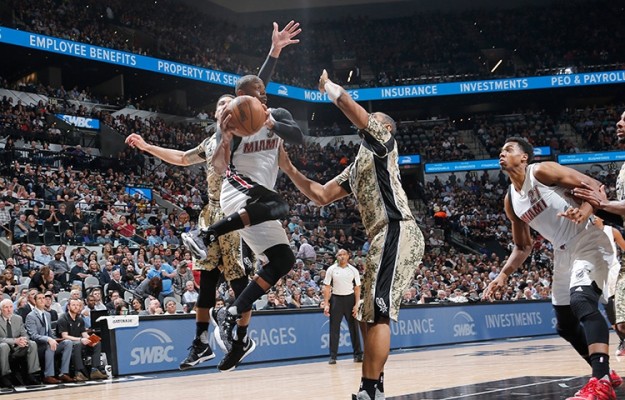 (San Antonio, TX) — The San Antonio Spurs are unbeatable at home and Kawhi Leonard is the best two-way player in the league. With each game played, each of those statements becomes more valid. Once again, the Spurs, led by Leonard, handled their business at home and blew out the Miami Heat 112-88 on Wednesday night.

Entering the night’s matchup, Miami was averaging 113 points in the month of March and had scored over 100 points in 11 straight games. That streak has now been snapped by the NBA’s best home defense, but that comes as no surprise, as the Heat haven’t scored 100 in San Antonio since 1996.

“They’re just a great team. They’re very disciplined. They don’t gamble a lot, they don’t do a lot of crazy, spectacular stuff but they’re solid, they’re consistent. You get a team like that where every person on the team is real solid and consistent, it’s real tough,” Heat guard Josh Richardson told the media after the game.

Richardson led all Heat scorers with 17. Dwyane Wade scored 16 points and took over the 40th and then the 39th spot on the NBA’s all-time scoring list. He played well in the three quarters in which he was on the court, but the Spurs were suffocating and it wasn’t enough. The rest of the Heat’s starting lineup were miserable in this one. They were missing Luol Deng (thigh bruise), Josh McRoberts (started for Deng) seemed out of his element, Joe Johnson couldn’t get it going and Goran Dragic and Amar’e Stoudemire were a combined 3-of-13.

“That is a very good defense. They have a great system, a trusted system. Players compete, so it was extremely tough for us to get any type of rhythm offensively. This one felt like 10 losses but it was only one,” Heat head coach Erik Spoelstra said after the game.

Hassan Whiteside, meanwhile, notched another double-double off the bench. The last time these two teams faced off, Miami’s seven-footer was ejected at a key moment in the game for elbowing Boban Marjanovic. The Heat eventually lost. This time, Whiteside kept his cool and finished the game with 12 points, 13 rebounds and two blocks in 32 minutes.

As for San Antonio, everything was going right. They finished the game shooting 52% from the field, including 57% from three. Leonard tied his career-high with 32 points but left in the third quarter due to a thigh contusion. Miami has now lost seven straight games against San Antonio.

The Heat will have to get over this one quickly as they still hope to continue their fight for the third seed in the Eastern Conference. They’ll face a slew of teams coming up that are already eliminated from playoff contention but as Wade insists, the team must remained focused:

“Teams like that can still beat you. We gotta take care of the games that’s on our schedule first and that’s Orlando on Friday at home so, we gotta continue to play well at home and then we got Brooklyn after that. Understand that these teams can beat you. We just gotta go out there and take care of business.”

While the Heat will host the Orlando Magic next, the Spurs have a chance to continue their home-winning streak when they host the Memphis Grizzlies on Friday.
[xyz-ihs snippet=”Responsive-Ad”]