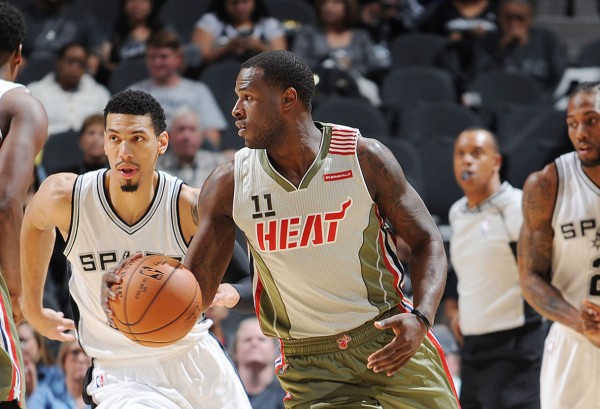 (San Antonio, TX) – For the fifth time in a row, the Miami Heat (2-7) got back in the game late but couldn’t overtake their opponent, as the San Antonio Spurs (8-3) halted their comeback attempt, 94-90, on Monday night at AT&T Center.

It was a two-man show for the Heat, as the efforts of rising star center Hassan Whiteside (who had an impressive 23 points, 17 rebounds and three blocked shots) and newly acquired shooting guard Dion Waiters were clearly not enough in a loss to legendary Spurs head coach Gregg Popovich’s squad.

All-Star small forward Kawhi Leonard, who continues to show he is a trick of all trades, had another double-double to lead his team with 24 points, 12 rebounds and four assists.

Waiters, who undoubtedly had his best game in a Heat uniform on Monday night, went off for 27 points, three assists, three blocked shots, two steals and two rebounds in an inspiring comeback effort by the Heat.

“Just going out there and trying to lead by example,” Waiters said. “Pick up the energy, just try to make plays.”

Heat head coach Erik Spoelstra, despite his team currently being five games under the .500 mark, continues to preach the highest amount of optimism to his players, as displayed in his postgame interview below.

.@MiamiHeat coach Erik Spoelstra was happy with the defensive effort in the 2nd half & says his team can't get obsessed with Monday's result pic.twitter.com/8jMenvzq2K

Power forward LaMarcus Aldridge had 18 points and three rebounds for San Antonio, while center Pau Gasol had a solid night with 12 points and eight boards.

“I think we’ve got to understand that when teams try to close out games with smaller lineups and we keep our bigger lineups out there, we’ve got to figure out how to hurt these teams and punish them on the offensive end,” Gasol said.

Up next, the Heat will try to snap their losing streak at home against the Atlanta Hawks (7-2) on Friday night at American Airlines Arena. The contest, which will tip off shortly after 7:30 p.m. ET, will be broadcast live locally on Fox Sports Sun.
[xyz-ihs snippet=”Responsive-ImagenText”]