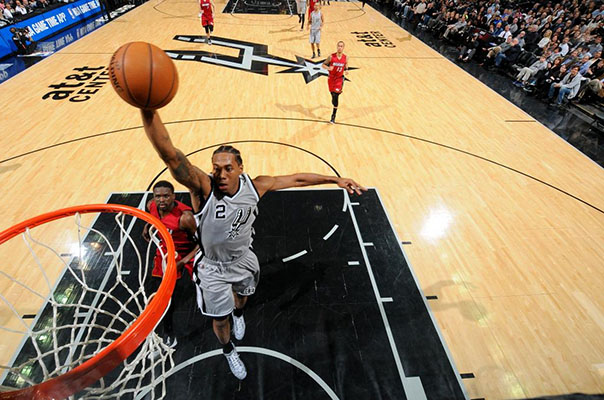 In the teams’ first matchup since the Spurs defeated the Heat in the 2014 NBA Finals back in June, it was never really a contest—San Antonio led Miami 30-19 after the first quarter. The Spurs would a hold a double-digit lead for the majority of the remainder of the game, leading by as many as 20 points in the fourth quarter.

Coach Erik Spoelstra credited the Spurs’ penchant for causing turnovers as a reason for their victory. Miami had 17 turnovers in the loss:

“Those turnovers led to pick-sixes, got them going and they had some easy looks from that. They had a big offensive quarter, 30 in the first, and we were never really able to get back in the game from there.”

The Spurs were led by a collective team effort. Kawhi Leonard and Tony Parker both combined for 45 points on 17-of-32 from the field. Leonard played just 33 minutes while Parker played just 29 minutes as they both sat out for the majority of the fourth quarter with San Antonio nursing a double-digit lead.

The Heat were sluggish on offense in the absence of their two star players. Hassan Whiteside missed the game due to an ankle injury while Dwyane Wade sat out his fifth consecutive contest due to a hamstring injury. Shawne Williams was also absent because of a hip injury.

As a result of their two best players missing, Miami was forced to rely heavily upon the offensive contributions of Chris Bosh, Luol Deng and Tyler Johnson. Johnson led the team with 18 points, while Bosh struggled on his way to 14 points on 7-of-18 shooting. Deng scored 17 points while grabbing six rebounds.

This game marked Johnson’s last contest under his current 10-day contract with the franchise. Because he was signed earlier this season to a prior 10-day contract by the Heat, Miami will be forced to make a decision tomorrow on whether they want to sign the undrafted free agent to a contract for the rest of the season, or let him go via free agency.

Spoelstra had the following to say in regards to Johnson’s performance versus the Spurs:

“I just like the way the kid competes on both ends of the floor. He lets it all out there even if he happens to make a mistake. I just love the way he competes.”

The loss dropped the Heat out of the top eight in the Eastern Conference for the first time this season. The Brooklyn Nets (22-29) now stand a half-game ahead of Miami for the eighth seed in the playoff race. It was the final game of the Heat’s four-game road trip, in which they finished with 1-3 record.

Bosh was asked on whether the Heat can use this as motivation of dropping out of the top eight for the rest of the season:

“Yeah, sure. I’m looking for anything right now. We need any kind of motivation you can get. We’re gonna be in a dog fight after All-Star break and it’s already started. It’s something that we’re really gonna have to wrap our mind around. It’s gonna be difficult. Six through nine (seeds of the playoff teams), those handful of teams are gonna be competing….we just have to keep our head and make sure we try to improve.

Once again, one of the key stories of the game was the opposing team succeeding in runs. A 20-4 run toward the end of the first quarter gave San Antonio a 30-17 lead. After the Heat’s 12th turnover of the game, the Spurs completed a 9-2 run by boosting their lead to 64-49 with six minutes to go in the third quarter.

Making injury matters worse for the Heat, Udonis Haslem exited the game after playing just four minutes due to a wrist injury. Coach Spoelstra admitted the injury didn’t look good at first, but he’s unclear on whether the injury is serious or not.

Chris Andersen started in place of Whiteside at center and posted 10 points with five rebounds in 22 minutes of action. Whiteside’s injury doesn’t appear to be serious and he should be back in the lineup for the Heat’s next game versus the New York Knicks.

Speaking of the Knicks, the Heat will travel back to Miami to play New York at American Airlines Arena on Monday night. Tip-off is set for 7:00 pm EST and the game will be broadcast on Sun Sports.
[xyz-ihs snippet=”Responsive-Ad”]