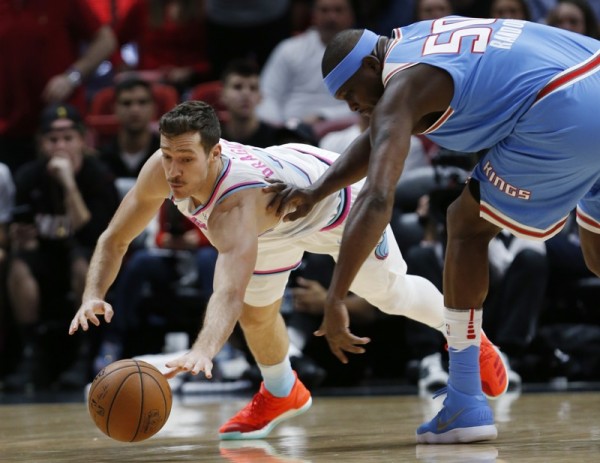 (Miami, FL) – After a five-game road trip, the Miami Heat finally got the chance to play in front of their home crowd against the Sacramento Kings on Thursday night. The game seemed like a perfect opportunity for the Heat to get a much-needed win, and it looked to be in their favor in the closing minutes. The Kings had other plans, however, and managed to make several huge plays in the final phases of the contest to deal Miami a loss, 89-88.

“We’ve been terrific in the last six weeks in our fourth-quarter execution and we’ve had a couple games now where it’s been erratic,” Heat head coach Erik Spoelstra said following the game. “We’ll learn from this as painful as it feels tonight. We will get better, again. We can’t take our execution for granted, and we’ll move on.”

Down 58-50 with 8:40 left in the third quarter, the Heat made their move. Led by Kelly Olynyk, who finished with 10 points, four rebounds, and four assists, and Justise Winslow, who had one of his best games since returning from a left knee injury with 11 points and five rebounds, the Heat closed out the quarter, outscoring the Kings 22-13 on their way to a 72-71 lead.

Miami continued to clamp down on the defensive side and move the ball around on its offensive possessions to increase the lead as the final frame began. Wayne Ellington finished the night with 20 points on 6-of-13 shooting from beyond the arc and started the quarter out on the right foot when he nailed a big 3-pointer. Hassan Whiteside, who just missed out on a double-double performance with eight points and 13 rebounds, helped steer Miami to a 83-71 lead with just over seven minutes left in the game.

The Heat could not close the game out when they had the chance, however, and the young Kings roster quickly began chipping away at the lead. Buddy Hield was instrumental in the Kings’ fourth-quarter comeback, scoring two huge 3-pointers to close the gap. Nevertheless it looked like the Heat were still going to get the win when Whiteside grabbed a clutch offensive rebound and converted on the layup to give Miami a five point lead, 86-81, with just 1:45 left in the game.

Miami could have closed the game out at that point, but Kings rookie D’Aaron Fox quickly proved why he deserved to be the fifth overall pick in last year’s NBA draft. Moments after Whiteside extended the lead to five points, Fox blitzed down the court and completed a nifty left-handed layup. Seconds later, he stole the inbound pass from Goran Dragic, enabling Hield to capitalize on a dunk and bring the game to a 86-85 nail-biter.

Still, when both teams traded scores on their following offensive possessions, all the Heat had to do was get to the foul line and extend their lead. Unfortunately, Whiteside committed a costly offensive foul as the Heat tried to push the basket up the court with 21 seconds left in the game. It was then that Fox made his most impressive play of the night.

Following a timeout, the Kings wound the game clock down to just a few seconds before Bogdan Bogdanovic put up a 20-foot jumper. He missed the shot, but Fox drove into the lane and shot up into the air to grab the offensive rebound and slam the ball home, giving the Kings the lead, 89-88.

“We didn’t deserve to win this game, especially the first unit we didn’t look right,” Dragic said from the team locker room. “I said to my teammates, it was my bad on that last play. I should box out, I didn’t. I take this loss. It’s on me.”

The Heat had one final chance to win the game on a last-second shot of their own, but Josh Richardson failed to draw the foul and missed as the final horn blew.

It’s not a huge surprise that the Heat struggled to put in a strong performance after their taxing five-game road trip, but that doesn’t make the loss any less disappointing. The Kings came into Thursday night’s game with one of the worst records in the NBA, and the Heat should have been able to close out the game in the final minutes.

Miami will have to wait until Saturday night to get the taste of tonight’s loss out of their mouth when the New Orleans Hornets come to town in a clash of Southeast Divisional rivals.
[xyz-ihs snippet=”HN-300×250-TextnImage”]