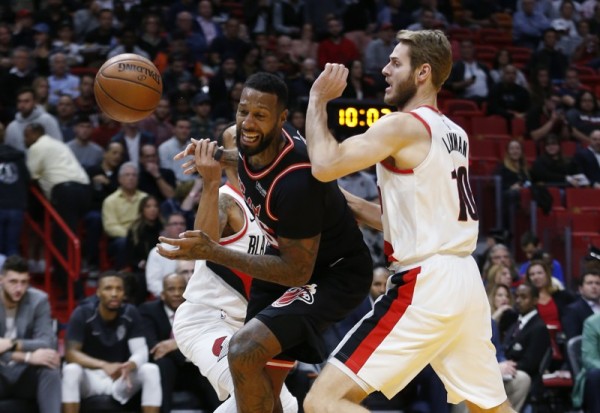 (Miami, FL) – The Miami Heat have been plagued all season by late-game collapses that have cost them a number of victories. It seemed that they had turned a corner following back-to-back convincing road wins, but on Wednesday night, Miami proved that it needs to improve mightily down the stretch before it wants to be taken seriously as a contender in the Eastern Conference. Despite leading by double-digits for much of the first half and deep into the second, the Heat lost to the Portland Trail Blazers in devastating fashion, 102-95.

“You’re not guaranteed when you get up that you’re going to stay up,” Heat head coach Erik Spoelstra said following the loss. “Really came down to better, more intentional, purposeful execution going down the stretch. They executed and made plays down the stretch. We had opportunities and we didn’t get quite the shots that we wanted to. Missed a couple free throws, they made theirs, and that’s the way it went.”

The game seemed like it was on its way to a blowout victory for the Heat when Dion Waiters, who had 17 points on 4-of-12 shooting from the field, nailed a 3-pointer to put Miami up 16 with 8:30 left in the third quarter. Bit by bit, however, the Blazers began to claw back and by the start of the final frame, the Heat were up just nine points, 79-70.

In the fourth, the Heat’s lead continued to shrink and with 6:35 left in the game, the score was all tied up, 86-86. A flurry of big shots by both teams followed and everytime the Blazers tried to wrestle control out of the Heat’s hands, Miami found a way to hold onto its slim lead. American Airlines Area had grown silent as the hometown crowd watched their team give up the large lead. However, when Josh Richardson (who finished the game with 11 points, two rebounds, and two assists) secured a clutch offensive rebound, he passed the ball to Waiters, who then set up an electric alley-oop dunk by Bam Adebayo, who had 12 points and seven boards in the contest. That got the crowd got themselves right back into the game.

Bam Adebayo goes up HIGH for the alley-oop dunk! ??? pic.twitter.com/rC0F84Pz3O

Unfortunately, that was the last time Heat fans would have something to cheer about as the Heat shooters had gone ice cold, and Blazers star Damian Lillard managed to get to the line multiple times on his way to a seven-point burst in the last two minutes of the game. By the end, the Heat were practically unrecognizable from the team fans had enjoyed in the first half, and failed to put up much of a fight at all in the game’s final moments.

While Miami shot well from the three-point line in the game, hitting 43.3 percent of its shots, turnovers and missed opportunities from the free-throw line proved to be paramount. The Heat shot a dismal 60.9 percent from the line and coughed up the ball 16 times.

It is hard to find many positives in a game that could have so easily been a much-needed win for the Heat. They were firing on all cylinders in the first half. Wayne Ellington, who finished the game with 24 points on 8-for-11 shooting, helped Miami score 60 points in the first half, but the team failed to regain that same form in two final quarters, scoring 19 points in the third period and just 16 points in the final frame. That kind of inconsistency has cost the Heat all season long. Whether it’s giving up large leads only to be forced to try and squeeze out a win in the final minutes or it’s falling behind big and failing to make the game much of a contest at all, Miami has fallen victim to it’s inability to maintain production throughout the entirety of a game time and time again.

It had seemed that Miami had managed to turn a corner following its two huge road wins earlier this week, but Wednesday’s loss proved that the Heat still have a lot of improving to do before they can be considered legitimate contenders, or even a solid playoff team.

It’s undoubtedly hard to come back from a loss like this, but that is exactly what the Heat will have to do as they travel to Charlotte to face off against the Hornets. The Hornets have struggled all season long and Friday’s game should be an easy win for the Heat. Wednesday’s game was a stark reminder, though, that in the NBA nothing is guaranteed.
[xyz-ihs snippet=”HN-300×250-TextnImage”]