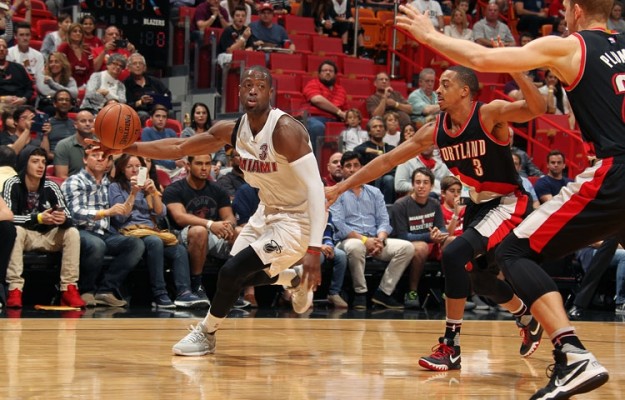 Bosh was 11-of-19 from the field, while adding six rebounds and four assists. Meanwhile, Whiteside contributed 22 points and 11 rebounds, though the clutch fourth quarter efforts of Gerald Green would not be overlooked. Midway through the fourth, Green quickly turned the game from a two-point deficit for the Heat into a six-point lead at 103-97 with 4:48 to play.

At the start of that quarter, Miami trailed by four, but Bosh scored 11 of the team’s first 13 points to give them a one-point lead with 7:11 left. After Green’s explosion, Portland never got closer than within four, though the Trail Blazers had a chance to make it a one possession game with just over a minute left.

However, a Portland turnover and a thundering dunk from Whiteside with 44.3 seconds remaining pushed the margin to six. Four free throws from Dwyane Wade, who finished with 18 points and seven assists put the game away.

Miami improved its record to 16-10 and now has an 8-1 record against Western Conference teams, while the Trail Blazers saw their mark fall to 11-18 on the season.

Afterward, Heat head coach Erik Spoelstra talked about Whiteside’s value to the team, despite his recent status of not seeing much action:

“We have great trust in him,” said Spoelstra. “He’ll be in there. (But) sometimes we’ll go with someone else.”

Spoelstra was especially complimentary about Whiteside’s effort after the break:

“Hassan was terrific in the second half defensively,” said Spoelstra. “That’s why I played him the entire second half.”

Throughout the game, both teams had good ball movement, handing out a combined 49 assists. The Heat held a slim advantage in that category at 26-23.

Early on, the Heat suffered breakdowns in the latter portions of each of the first two quarters that forced them into deficits that they eventually overcame. In last three minutes of the opening quarter, the Trail Blazers outscored Miami 10-1. Then, in the final four minutes before intermission, Portland put together a 17-6 surge to hold a 62-52 halftime lead, while also maintaining a 26-13 rebounding advantage during the first half.

The third quarter saw the Heat struggle to maintain their composure after being assessed three technical fouls in the span of just over three minutes, which could have conceivably come back to bite them down the stretch. One given to Wade was sandwiched around a pair given to Goran Dragic, who was ejected with 1:37 left in the third quarter.

Wade’s technical came just seconds after he had the ball stripped by C.J. McCollum, a turnover that Portland converted into a quick basket. Each of Dragic’s technicals came after being whistled for a foul against Damian Lillard. The fireworks then continued just as the quarter ended when Whiteside was assessed a technical for slamming the ball down after swatting away a pair of Trail Blazer shots. Lillard took all four free throws awarded to Portland, converting three of them.

“The one thing I did like, I liked the passion,” said Spoelstra. “I like seeing that kind of passion if you can corral it.”

Next up for the Heat will be a Tuesday night home matchup against the Detroit Pistons beginning just after 7:30 p.m. ET. That’s followed by a Christmas Day home clash versus the New Orleans Pelicans beginning shortly after 12:00 p.m. ET.
[xyz-ihs snippet=”Responsive-Ad”]