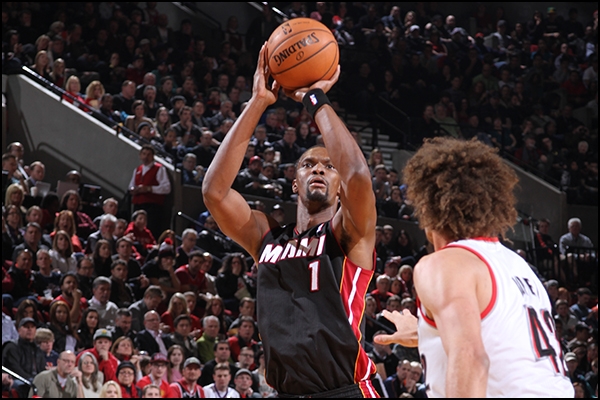 The Heat will look to build off of their Sunday night win against the Brooklyn Nets, a game where the team played well on both ends of the ball. Miami held Brooklyn to under 40 percent from the field and under 30 percent from three while getting big offensive games from center Chris Bosh (26 points) and guard Dwyane Wade (25 points).

Wade was quick to point out Hassan Whiteside’s improvement and value to the Heat after Tuesday’s practice.

“He’s learning every day. He’s come in and our coaches are doing a great job working with him, [helping him] figure out our system and also [seeing] what he’s comfortable with as well. Defensively he’s a game-changer for us. You know, the other night he had five blocks but he altered and probably made other guys think about going in the paint. He does a good job rebounding the ball for us…it makes us a bigger team, it could make us a better defensive team at protecting the paint.”

Whiteside has steadily increased his production across the board during the past seven games. Coach Erik Spoelstra has entrusted Whiteside with more minutes during that time span, going from five minutes in a game (vs. the Phildelphia 76ers) to 27 minutes in the recent win against Brooklyn. As Wade articulated, his defense has peaked to that stellar 10-rebound and five-block game against Brooklyn. The 7’0” center has also reached double-figures in scoring. It’s clear that he’s been a tremendous asset to the team.

Despite their recent struggles, Wade also remains optimistic as to where the team is headed.

“You always try to build on any positives,” the three-time NBA champion said. “The biggest thing I thought we did a good job of was not letting the game go when we had the lead. A lot of these games we’ve been in the game, had the lead, and let it go.”

This was by no means ignorance of the tough stretch of games ahead of the Heat. The road trip includes games against the Blazers, Los Angeles Clippers (January 11), and Golden State Warriors (January 14), three of the best teams in the NBA.

“It’s always good to be in a familiar gym,” Chris Bosh said of the Brooklyn win after Wednesday’s practice. “That’s always gonna help. But these are tough teams we’re [going to be] playing. It’s a tough west coast road-trip. I think it’s just what we need right now.”

Wade echoed those sentiments. “Portland is first. They’re playing very well,” he said. “And you know it’s our job to just go out here and try to play the game we need to play and try to compete at a high level…everyone knows the Western conference teams are good teams…you just gotta play your game at a very high level to win it. We’re looking forward to that challenge.”

“It’s a great opportunity,” Chris Bosh said. “I want to bond and win. I don’t wanna just bond…we wanna have a good road trip by winning games. That’s an opportunity we have in front of ourselves. It starts with us making sure we’re in this together because it’s not going to be easy.”

Miami has struggled to find consistency, battling injuries across the board. When healthy, however, Wade and Bosh have impressed. The trick is getting everybody else, especially the young players, to buy in and find their individual comfort zones.

“Sometimes it’s good to feel pressure, other times not so much. You have to relax and play,” articulated Chris Bosh. “You have to find that balance. I think individually and as a team that’s always changing. As far as teams are concerned, you need each guy in his wheelhouse. So if a guy plays well when he’s amped up, amp him up. This guy plays well when he’s mellow, you gotta mellow him down. Just I think feel the whole vibe from the team so collectively we can do our job.”

The Portland Trailblazers have the second-best record in the NBA thus far. Miami certainly goes into the game as heavy underdogs (Get parlays, teasers, if bets and action point wagers for this NBA game at mybookie.ag) against a team that’s won eight of their past ten games. Bosh still expects the Blazers to want to stick it to the Heat.

“It’s still Miami. We’re still the Heat and I think that means something.”

Tip-off is set for shortly after 10:30pm EST on TNT.
[xyz-ihs snippet=”Responsive-Ad”]