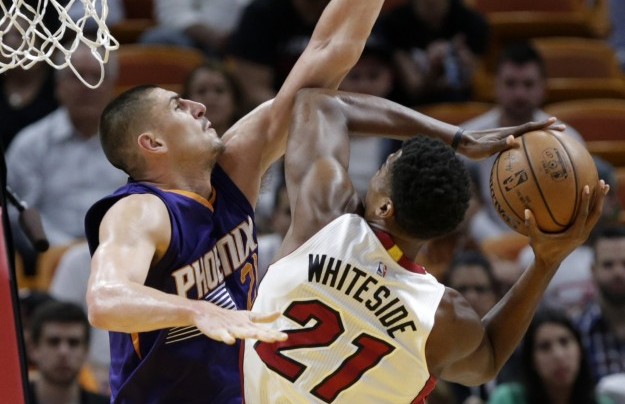 (Miami, FL) – Even with the absence of key starting shooting guard Dion Waiters for the foreseeable future, the Miami Heat (35-36) used a balanced offensive attack to roll over the reeling Phoenix Suns (22-49) by a score of 112-97 on Tuesday night at American Airlines Arena.

Heat star center Hassan Whiteside, who did not make the 2017 NBA All-Star Game to the dismay of many fans, put together a stellar performance that included putting himself in the franchise’s single-season history book.

Whiteside, who passed Heat great and center Rony Seikaly in most rebounds for a single season in Heat history, also set a franchise record with his 13th consecutive double-double during Tuesday night’s victory over the Suns.

The center dominated his way to a team-high 23 points, 14 rebounds, three steals and two blocked shots before he left the game with just over two minutes remaining due to a right-hand laceration.

“I like the way the guys approached this game. Hassan, we’ll find out. Obviously, it’s a laceration between his fingers and he’s getting stitched up right now,” said Heat head coach Erik Spoelstra after the win. “We’ll know more tomorrow. But wow, those minutes he played, he was extremely impactful.”

Reserve shooting guard Tyler Johnson, who recorded a game-high five steals in just 29 minutes of action, went off for 17 points (7-of-17 shots made from the field) to go along with six boards and four assists.

The truth works. Tyler Johnson joins @TheJaxShow to discuss his all-around game and the @MiamiHeat getting back to their identity Tuesday. pic.twitter.com/kMNYDTr7q5

Richardson, who missed a considerable amount of time earlier in the season due to a left foot sprain, stepped up for the injured Waiters.

J-Rich joins @TheJaxShow in the studio to discuss why he focuses on the defensive end to help get him into the flow of the game. #HeatNation pic.twitter.com/60MJATiLcZ

Phoenix, who has now lost five straight contests, will likely get a top-three pick in the 2017 NBA Draft in late June.

Up next, the Heat will play their final game of a five-game homestand at American Airlines Arena when they host the Toronto Raptors (42-29) on Thursday night. The contest, which is scheduled to tip off shortly after 7:30 p.m. ET, will be broadcast live locally on Fox Sports Sun and nationally on NBA TV.
[xyz-ihs snippet=”Responsive-ImagenText”]