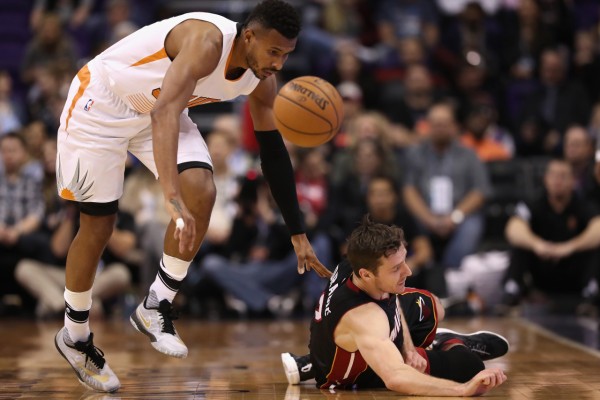 (Phoenix, AZ) — Both teams entered Tuesday night’s contest with identical records of 10-25. Something had to give, and eventually it did, as the Phoenix Suns took advantage of the shorthanded Miami Heat to beat them 99-90.

Miami got off to a solid start despite being without six of its key playmakers. Hassan Whiteside, James Johnson, Josh McRoberts, Justise Winslow, Dion Waiters and Tyler Johnson all sat out with injuries as the Heat had the league-minimum of eight players activated for the night.

Goran Dragic, however, finally felt healthy enough to play after missing three of the last four games with a back injury. The former Phoenix Sun was hot early, and scored 18 of his 24 points in the first half. His fiery start kept the Heat within striking distance for a while, as they only trailed 52-56 by halftime.

Though Miami kept things close early on, the team’s lack of starting-caliber players on the court became glaringly obvious as time went on. The Heat were outscored 27-14 in the third quarter, and despite a strong fourth-quarter effort, they could not overcome the deficit, as the Suns cruised to a relatively easy home victory.

Dragic, who is now averaging 19.0 points and 6.8 assists on the season, spoke to the media after the game about how he and the Heat just couldn’t keep things going in the second half:

“I was loose [in the first half]. I was loose, then in the second half my back got a little bit tightened. No pain, though, I just felt like I didn’t move so well after that. Tough game, though. I think we controlled the game for the first 20 minutes and then, with their speed, they just got everything they wanted and we didn’t play our defense.”

The only significant contributor for Miami besides Dragic, who added nine assists to his solid scoring night, was Willie Reed, who started at center for the injured Whiteside. The reserve big man put up a career-high 22 points and 18 rebounds with two blocked shots. He spoke about it in the team’s locker room after the game:

“I just wanted to go out there and play as hard as I could to give my team the best chance to win,” Reed told reporters. “The numbers came [for me], but at the end of the day, we just didn’t get the ‘W.'”

As for the Suns, Devin Booker and Marquese Chriss led the way with 27 and 18 points, respectively. It was a well-needed win for the Suns, who were ranked last in the Western Conference heading into the night’s matchup.

Meanwhile, Miami has now dropped its sixth straight, and has lost nine of its last 10 games. Granted, it’s been one of the most injury-riddled teams in the league this season, but Heat head coach Erik Spoelstra makes no excuses and still had faith in his guys heading into this one:

“What I wanted to see us do is be able to defend, to be able to hold them to under 40 percent, to make it ugly and be a stone’s throw away in the fourth quarter,” said Spoelstra.

At this point, that’s really all Spoelstra can ask for, particularly from his end-of-the-bench guys. With a season as tough as the one Miami is having, covering the basics and finding bright spots to build on becomes a top priority.

“[In the fourth quarter] we got a lot more active, a little bit more speed, covering a little bit more ground and doing things with more passion, more energy, more commitment. We got some deflections on some of the balls and we were able to turn those into free, more open possessions, but the lesson there is to have that kind of offensive activity regardless of what’s going on,” said Spoelstra.

Unfortunately for Miami, their fourth-quarter efforts were just too little, too late. Now they must find a way to pull it together for a quick turnaround, as they face the Sacramento Kings Wednesday night, before visiting the Los angeles Lakers on Friday. After that, the road gets even rougher when Miami must face off against the high-flying Los Angeles Clippers on Sunday, and then the league-leading Golden State Warriors early next week.
[xyz-ihs snippet=”Responsive-ImagenText”]