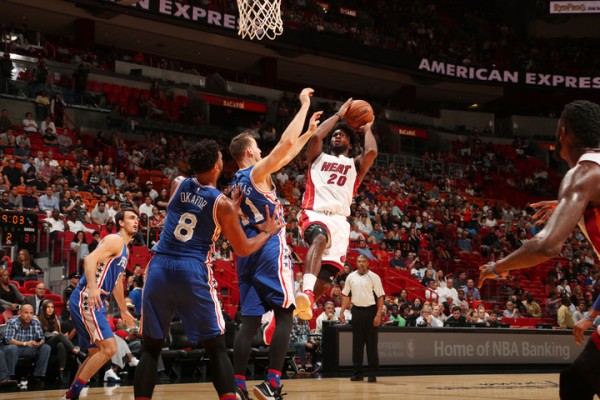 Recently signed backup shooting guard Luis Montero, who nailed a 3-pointer with 46 seconds remaining in the fourth quarter to get the Heat to within one, missed a 25-footer from behind the arc at the buzzer.

Philadelphia small forward Dario Saric led all scorers on Friday with 19 points (8-of-14 from the field) to go along with seven rebounds in 29 minutes. Center Joel Embiid had 18 points and nine boards in just 18 minutes, while small forward Jerami Grant came off the bench and had 17 points, four rebounds and two steals.

After the Heat had led 62-54 at halftime and were up by as many as 10 points in the first quarter, they struggled offensively in the second half and turned the ball over 19 times.

“It was one heck of a training camp. Super competitive. We were able to establish a Miami Heat work ethic with our team,” coach Spoelstra said.

Up next, the Heat will travel to play their first game of the regular season on Wednesday night when they visit the Orlando Magic at Amway Center. The contest, which is scheduled to tip off shortly after 7 p.m. ET, will be broadcast live locally on Fox Sports Sun.
[xyz-ihs snippet=”Responsive-ImagenText”]