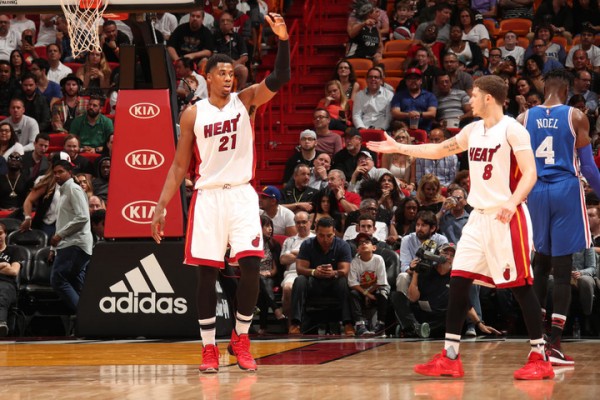 (Miami, FL) – In what continues to be one of the more eye-opening stories of the 2016-17 NBA season, the Miami Heat (21-30) kept the league’s longest active winning streak in tact on Saturday night, delivering the Philadelphia 76ers (18-32) a 125-102 thrashing at American Airlines Arena for their 10th straight victory.

In just 27 minutes of action, Heat rising star center Hassan Whiteside had one of the best games of his career as he went off for a whopping 30 points on 14-of-17 shots from the field (17 points and 11 rebounds in the first quarter alone), 20 rebounds and three blocked shots.

“He’s been building and playing very detailed, coherent, multiple-effort basketball really during this whole stretch,” Heat head coach Erik Spoelstra said of Whiteside. “This is the first time he’s actually put together the stats that everybody wants to see from him, but we were more encouraged by the last several games of him having rather ordinary stats but doing everything else at an exceptional level in terms of making winning plays. This time, he just put it all together.”

Whiteside, who was not selected to the 2017 NBA All-Star Game this season in New Orleans, did not hesitate to call out the people who continue to underestimate him as a player.

With their 10th straight win, the Heat are currently in sole possession of the second-longest winning streak in NBA history for a team with a losing record, trailing only the 1996-97 Phoenix Suns’ 11-game streak.

Miami shooting guard Dion Waiters, who contributed heavily to the Heat shooting an impressive 12-of-22 as a team from behind the arc, finished with 21 points and seven assists.

“It’s just great, man. Just to see that the hard work we put in day in and day in out.” Waiters said of the winning streak. “A lot of stuff people don’t get to see behind the scenes and how hard we go. It’s just truly amazing, man. We’ve got to continue to keep it up, though.”

For a team that had actually played very well in January with a 10-5 record, the 76ers lost their third straight game and had trouble keeping up with the Heat most of the night. Starting forward Ersan Ilyasova led all Sixers scorers with 21 points and five rebounds, while shooting guard Gerald Henderson and reserve power forward Richaun Holmes had 12 points apiece.

In search of their 1th consecutive victory, the Heat will start a four-game road trip on Monday night when they take on the Minnesota Timberwolves (19-31) at Target Center. The contest, which is scheduled to tip off shortly after 8:00 p.m. ET, will be broadcast live locally on Fox Sports Sun.
[xyz-ihs snippet=”Responsive-ImagenText”]