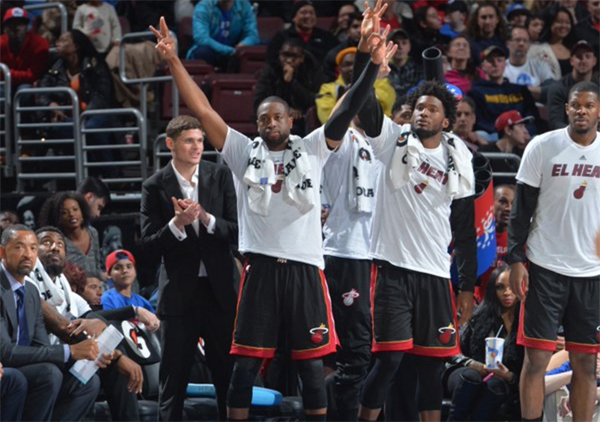 (Philadelphia, PA) — The Miami Heat scored 40 points in the opening quarter en route to a 112-102 win over the Philadelphia 76ers on Friday night. The 40 points marked the highest scoring period of the season for Miami and they followed that all the way to victory as they extended their current win streak to four.

To Philadelphia’s credit, they kept this one relatively tight. Midway through the third quarter, Philly took a three-point lead after trailing by as many as 16 in the first half. It would be their largest lead of the game. Despite forcing 16 Miami turnovers and scoring in triple figures themselves, in the end, there was just too much Heat for the struggling 76ers.

Meanwhile, Miami’s offense as a whole seems to be transforming before our very eyes. The Heat are now undefeated since the acquisition of veteran guard/forward Joe Johnson and have won seven of their last nine since the All-Star break.

Entering their matchup with the 76ers, the Heat were averaging just 97.6 points per game, good for third-to-last in the league. However, in eight games since the All-Star break, they’ve upped that to more than 108 PPG, and showed no signs of slowing down Friday night.

After the game, Hassan Whiteside spoke to the media about his team’s recent efforts:

“You know, we’re a really gritty team. We got young guys like Justise (Winslow) and Josh (Richardson) that (are) looking to get after and really pressure the ball and play really great defense. We’re a really scrappy group.”

As for Whiteside, he was up to his dominant ways again Friday night. Miami’s 7-footer finished with 19 points and 19 rebounds to notch his ninth double-double off the bench in his last 11 games.

“It’s been very impressive. Credit is due to him. After going into the All-Star break and coming out a different person,” Heat guard Dwyane Wade said of Whiteside after the game. “He’s put the work in on his free throws. I mean, he’s shooting better than anyone on our team right now. He’s put the work in and everyone has confidence in him stepping up, shooting, so, you know, all credit goes to him”

Whiteside appreciated the credit and expressed his current level of comfort at the free-throw line in his own words:

“You know when it’s a rainy day and you get hot chocolate, and you put a nice movie on and you tuck yourself in? That’s how comfortable I feel at the line.”

While Wade led all scorers with 21, perhaps more notable is the fact that seven Heat players scored in double figures Friday night, which seems to be the way this team is winning lately. Heat head coach Erik Spoelstra spoke to the media about it after the game:

“What we wanted to do was approach this game to see how much we could play to our identity. Defensively, that means tough, physical; limiting easy opportunities in the paint. They were getting some offensive rebounding opportunities that we need to shore up a little bit … For the most part, defensively, we brought the type of disposition that we wanted,” said Spoelstra. “The pace was good on the other end. We have to continue to get better at taking care of the basketball … But in terms of the mentality of what we want to bring, the guys brought it tonight.”

On the other end, Philadelphia guard Ish Smith and forward Robert Convington had impressive outings for their club, finishing with 26 and 25 points respectively. The 76ers, though, are still in search of just their ninth victory of the season and are currently facing a league-worst 11-game losing streak. Things don’t look to be getting easier any time soon, though, as they must face the surging Heat again in less than 48 hours for a Sunday afternoon matchup down in Miami.
[xyz-ihs snippet=”Responsive-Ad”]