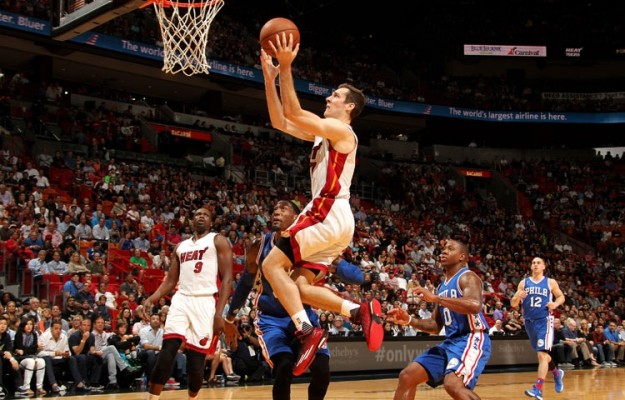 (Miami, FL) — A sunday evening dogfight in Miami ended with the home team narrowly escaping 103-98. Though the Miami Heat were able to put the Philadelphia 76ers away with relative ease in their last matchup, it was evident early on that Philly was determined to make a game out of this one.

The 76ers were woefully undermanned heading into their second matchup in three days versus the Heat. They were without their leading scorer in Jahlil Okafor, who has missed the last five games with a bruised shin.

They were also missing their leading rebounder and shot blocker, Nerlens Noel, who sat out with a sore knee. Nik Stauskas and Kendall Marshall also stayed in Philadelphia with upper respiratory infections, however the struggling Sixers managed to keep this one competitive.

After taking a two-point lead into the half, Philadelphia traded scoring runs with Miami in the third quarter to enter the final period tied at 69 apiece.

The start of the fourth quarter saw the 10th lead change of the night. At one point, the Sixers managed to take a six-point lead, only to have it erased after two quick threes by Heat rookies Josh Richardson and Justise Winslow. After a few more lead changes, the Heat stepped on the gas and never let up, as they eked out their eighth win in 10 games.

Heat head coach Erik Spoelstra shared his thoughts on the tough win after the game:

“They (Philadelphia) made it tough. We had to earn it. There were things that we certainly could’ve done better but this was not only a case of us playing down to the competition. That really isn’t enough of a credit to Philly and what they brought tonight.”

Five Heat players finished in double figures on Sunday, for another all-around, efficient team win. Heat guards Goran Dragic and Dwyane Wade led all scores with 23 apiece, but Hassan Whiteside was the real story for Miami Sunday evening. Since the All-Star break, Whiteside leads the NBA in rebounds and blocks. He continued those league-leading efforts Sunday night with 14 points, 13 rebounds and seven blocks.

“We’ve seen this before and you (have to) give them credit. Dwyane Wade and Whiteside’s defense and his ability to block shots and alter shots. You know, Joe Johnson being Joe Johnson, and I thought Dragic was really good tonight.”

Speaking of Johnson, he seems to be fitting in quite comfortably for Miami. He’s been averaging 14.0 points a game and shooting over 60 percent since joining the Heat. More importantly, he seems to be helping the Heat’s offense evolve as a whole.

“It changes a lot with spacing, you know, he can shoot the ball, he can pick and roll, he can put it in the low post and he’s a huge factor for us,” Dragic said of his new teammate after the game. “He’s still undefeated with us and hopefully it stays like that.”

The Heat have now won five straight games, their longest win streak since LeBron James left town. At 37-26, they’ve already tied their win total from last season and are now just a half game behind Boston for third place in the Eastern Conference standings.

Philadelphia, on the other hand, has lost their 12th straight game and possesses the league’s worst record at 8-55. The 76ers hope to notch a couple wins over their next stretch of games though, as they play six of their next seven at home, beginning with a matchup versus Houston. Meanwhile, Miami begins a three-game Eastern Conference road trip starting Wednesday against Milwaukee.
[xyz-ihs snippet=”Responsive-Ad”]