Miami Heat vs. Philadelphia 76ers Game Recap: All Good Things Must Come to an End 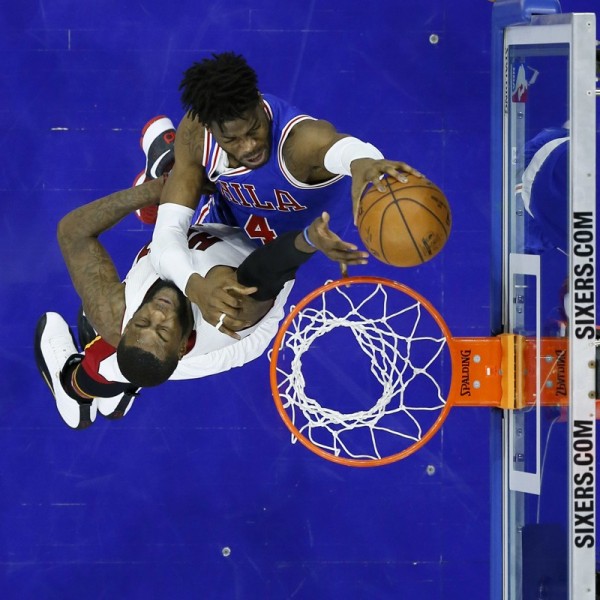 (Philadelphia, PA) – After they had won a league-leading 13 straight games heading into tonight’s contest, the Miami Heat (24-31) finally had their winning streak snapped on Saturday night as they fell 117-109 to the Philadelphia 76ers (20-34) at Wells Fargo Center.

“You know, you have to give credit. They were the most physical team tonight. They played well. I felt like our effort was there, but we were not physical enough,” Heat point guard Goran Dragic said after the game.

Monster games for the Heat from both Dragic (30 points on 12-of-21 shooting, five rebounds, two assists, two steals and seven turnovers) and power forward James Johnson off the bench (26 points on 8-of-15 shooting from the field and 9-of-13 free throws made) were simply not enough to beat the 76ers on the road.

“I love where he’s growing,” Heat head coach Erik Spoelstra said during his postgame press conference about Johnson. “We want to continue to be open to where he can get to next. We’re not going to stop here.”

Even without the services of center Joel Embiid, who missed his ninth straight game with a torn meniscus in his left knee, the 76ers displayed a balanced attack on offense. With seven players scoring in double figures, their three leading scorers each had 19 points apiece: Robert Covington, Nerlens Noel and Dario Saric.

On offense, the Heat really struggled to limit their turnovers against the 76ers. As a team, Miami turned the ball over a whopping 19 times compared to only 10 committed by Philadelphia.

“They were relentless. They had us on our heels from the tip all the way to the end,” Spoelstra said. “Not being able to get our normal defensive stops and then turning the ball over 20 times. We score 109, but we only have 16 assists. We’re trying to win with a different identity.”

Philadelphia guard Gerald Henderson and forward Ersan Ilyasova each had 14 points, while point guard T.J. McConnell had 14 points and a game-high 10 assists.

For Miami, rising star center Hassan Whiteside had another double-double with 12 points and 19 rebounds, while shooting guards Tyler Johnson and Wayne Ellington had 17 and 16 points, respectively.

Up next, the Heat will return home on Monday night when they host their Southeast Division rival Orlando Magic (20-36) at American Airlines Arena. The contest, which is scheduled to tip off shortly after 7:30 p.m. ET, will be broadcast live locally on Fox Sports Sun.
[xyz-ihs snippet=”Responsive-ImagenText”]