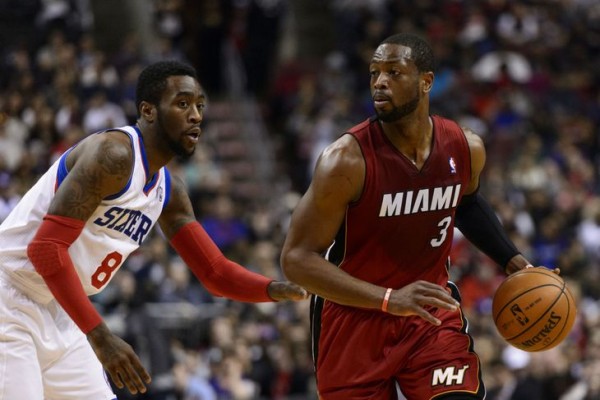 (Miami, FL) — The Miami Heat (23-31), who have alternated wins and losses in their last four games, hope to continue that trend Monday night when the Philadelphia 76ers (12-43) visit American Airlines Arena. The Heat lost to the visiting New Orleans Pelicans on Saturday night, and if recent history is any guide, they should begin a short two-game road trip later this week with a bit of momentum behind them.

The Heat learned over the weekend that they will be without star power forward Chris Bosh for the remainder of the season. Bosh was diagnosed with blood clots on one of his lungs, and though he is expected to make a full recovery, Miami will now have to make a push for the playoffs without their co-leading scorer (Bosh and Dwyane Wade each average 21.1 points per game).

Bosh’s health scare tempered the excitement surrounding the Heat’s acquisition of point guard Goran Dragic from the Phoenix Suns at the NBA’s trade deadline. Though Dragic will shore up Miami’s point guard position for the rest of the season, he was expected to make the Heat a formidable first-round playoff opponent for any Eastern Conference contender while playing alongside Bosh, Wade, small forward Luol Deng and center Hassan Whiteside.

Now, the Heat will have to try to hold on to one of the final two playoff spots in the East while dealing with the loss of a key contributor.

Saturday night’s loss to the Pelicans did not help.

Playing without forward Anthony Davis, who left the game early due to a sprained right shoulder, the Pelicans still managed to dominate the Heat en route to a 105-91 victory.

Dragic had a respectable 12 points and three rebounds in his Heat debut, while Wade scored 19 points to go along with four points and four rebounds in 30 minutes of action.

Wade was pleased with his new teammate’s performance in his first game with the team, but realizes it will take time for the offense to flow with their new quarterback, “I’m sure it was a tough day for him to get out there and try to perform…(but) we’ll get better. It’ll come. He’s a guy who’s going to figure it out, so it’ll come.”

Point guard Mario Chalmers, who will now be Dragic’s backup, led all Heat scorers with 20 points on 9-13 shooting.

Chalmers has started 35 of the Heat’s 54 games this season, but he is taking his new role off the bench in stride, “It’s been tough, but I’m the type of person who’s going to do whatever (it takes) to make us a better team, and right now that’s what Coach is doing and I’m accepting it,” he told reporters after the game on Saturday.

Speaking to the media on Sunday, coach Erik Spoelstra said his team’s injury-plagued season has prepared them to make yet another adjustment to their lineup and game plan.

“We’ve had to remake our team a handful of times this year and we feel comfortable doing that,” said Spoelstra. “What we’re doing is just trying to focus on solutions.”

The 76ers come to Miami having lost three straight games and six of eight overall.

Philadelphia was busy at the trade deadline as well, sending their best player – Michael Carter-Williams – to the Milwaukee Bucks in a three-team deal that included the Phoenix Suns. The 76ers received draft picks in return.

Though they have the second-worst record in the league, Philadelphia has managed to split its two meetings with Miami this season, with the 76ers having defeated the Heat 91-87 in Miami the last time they faced each other in December.

Monday’s matchup versus the Heat will be the second game of a back-to-back set for Philadelphia; the 76ers lost to the Orlando Magic on the road, 103-98, Sunday night.

The Heat are percentage points ahead of (and tied in the loss column with) the eighth-place Brooklyn Nets in the Eastern Conference standings.