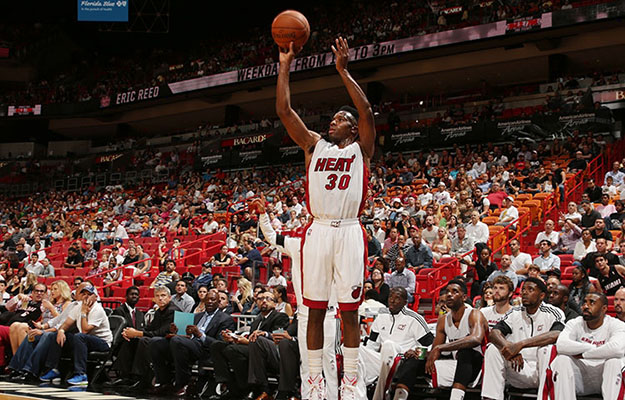 (Miami, FL) — The Miami Heat fought and clawed their way back. But in the end, it wasn’t enough.

Despite trailing 91-84 late in the fourth quarter with 3:08 remaining, the Heat went on a 9-0 run to take a 93-91 lead over the Orlando Magic. Following an Aaron Gordon reverse layup which tied the game at 93-all, Heat rookie Shabazz Napier hit two free throws to put Miami up by two with just 2.2 seconds left in regulation, which set up the Magic’s Andrew Nicholson to hit a mid-range jumper for Orlando to send the game to overtime.

In spite of its resiliency late in the fourth quarter, the Heat showed very little spark in the extra five-minute period. Miami was outscored 13-6 in overtime by their Southeast Division rivals, as its comeback efforts were wasted in a 108-101 loss.

The Heat had a starting lineup that featured Norris Cole at point guard, Dwyane Wade at shooting guard, Luol Deng at small forward, Shawne Williams at power forward and Chris Bosh at center. Of the five starters, it was Cole who made the earliest impression, notching four assists in the first six-and-a-half minutes of the game before finishing the evening with six total dimes in 26 minutes of action.

“He did great, he was very solid, he did a good job of getting us into our offense,” Wade said.

The fourth-year guard made it clear he was going to pass first and shoot second in his first start of the preseason. Cole took just three shot attempts, and scored just two points. Regardless, his pass-first mentality aided the Heat in running their offense smoothly during the first quarter.

“More continuity, more flow, so a lot better than the first game,”

Wade stated in regards to the Heat’s offensive execution in their overtime loss in comparison to their 98-86 defeat to the New Orleans Pelicans in the preseason opener.

While Cole established himself as the star of the Heat during the first half of the opening quarter, it was Deng who shined brightest throughout the night.

The former Chicago Bull looked like a natural fit in Erik Spoelstra’s offense, as he led all players (along with Bosh) with 18 points on 6-of-13 shooting. He also contributed six boards in 24 minutes of playing time.

“He’s that type of player. He’s an experienced player, played in good programs before this. There’s a reason why we recruited him so hard. We like his skill set, he fits our defensive mindset but also his offensive ability is underrated,” Spoelstra said.

While Deng looked impressive in his all-around offensive efforts, Bosh showed off his mid-range game and established himself on the boards. The big man scored 18 points on 7-of-13 from the field while grabbing nine rebounds in just 22 minutes of action.

The game was close all throughout the evening, as there were 19 ties in regulation alone. The Magic were without two of their best players in Channing Frye and Victor Oladipo, both of whom are struggling with knee ligaments. The Heat sat both Josh McRoberts and Udonis Haslem. McRoberts continues to recover from toe surgery and might miss the regular season opener on October 29 versus the Washington Wizards.

One man’s pain is another man’s gain as Williams started his second consecutive game at power forward. With Miami thin at the four and five positions, the Heat’s starting lineup just might feature Williams by the time the regular season rolls around. Unfortunately, No 43’s evening was a rough one. He shot just 1-of-7 from the field in 20 minutes of court time. The three-point marksman was just 1-of-5 from beyond the arc. However, he did log a plus-five in the plus/minus category.

Another notable performance was that of James Ennis, the rookie small forward looking to make his first NBA roster this October. Ennis looked solid for the second consecutive preseason game, posting a double-double with 14 points and 10 rebounds. He was 6-of-11 from the field with five dimes.

Spoelstra commented on the rookie’s chances of making the Heat’s roster in the postgame press conference:

“This team in general, we’re open-minded. We’re seeing if he can progress. He’s a much different player now than he was a year ago coming out of that Summer League and before he went to Australia. But he’s had a lot of development in our building already for two straight summers. There’s a lot of work to do to understand our system and we’ll continue to develop him. We want to invest time in him.”

Nikola Vucevic and Tobias Harris led the Magic in scoring, with 16 and 15 points each.

Despite the 0-2 start to the preseason, the Heat have seen positive signs in the development of their young players. Next up on the schedule is a trip to Rio De Janiero in Brazil, to face the LeBron James-led Cleveland Cavaliers on Saturday.

“It’s going to be a lot of excitement there from the fans and for both of the teams, so we’re going to continue to grow this game,” said Wade of playing in Brazil. “We’re partners with the league….it’s a cool element that we get to do, take it international.”