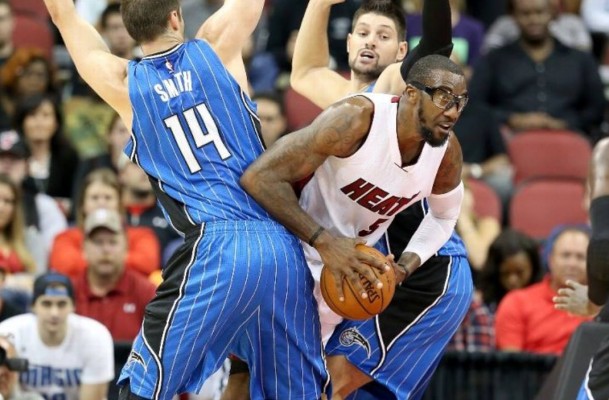 (Louisville, KY) — In their second game of the preseason, the Miami Heat (0-2) were edged 100-97 by the Orlando Magic (1-1) on Wednesday night at the KFC Yum! Center in Louisville, Kentucky.

“In Kentucky, there’s nothing to do but cook and watch basketball,” joked forward Chris Bosh on Tuesday. “And drink bourbon. That’s good livin’.'”

Magic point guard Shabazz Napier, drafted 24th overall by the Heat last year out of the University of Connecticut, got revenge on his former team when he hit the game-winning three pointer with 3.5 seconds left in regulation.

“He’s working hard. He’s fit in nicely,” said Magic head coach Scott Skiles on Napier. “He can make a shot. He does a good job of kind of running the club for us. We’re evaluating him. We’re going to watch him through exhibition and just kind of see where he’s at.”

In the loss, Miami came out white hot to start the game, as they outscored Orlando 11-0 until Magic forward Channing Frye hit a three pointer with 9:11 remaining in the first quarter.

Bosh, who is seeing some of his first game action since blood clots were discovered in his lung back in February, had a very strong performance on the night. The two-time NBA champion and 10-time All-Star racked up 18 points (five of seven from the field, two of three from behind the arc and a perfect six of six from the charity stripe), three rebounds, and three assists in 24 minutes of play.

Two other Heat players scored in double figures on the night, as point guard Goran Dragic had 12 points and five assists while newcomer shooting guard Gerald Green had 11 points and three boards.

Up next on their preseason schedule, the Heat will return home to play the San Antonio Spurs (0-0) at AmericanAirlines Arena on Monday night. The contest, which is scheduled to tip off shortly after 7:30 pm ET, will be broadcasted on FOX Sports Sun.
[xyz-ihs snippet=”Responsive-Ad”]