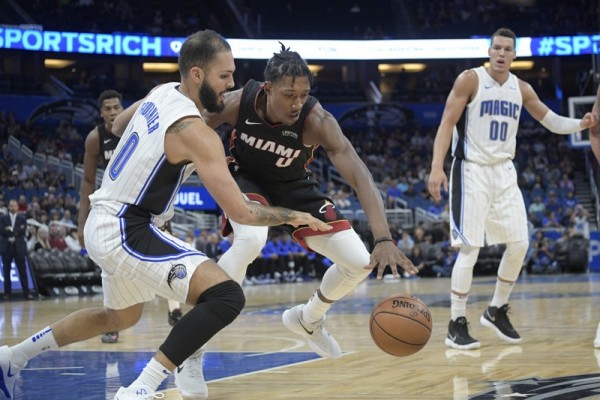 (Orlando, FL) – With the regular season right around the corner, the Miami Heat (1-2) dropped their third preseason game, 93-90, to the Orlando Magic (2-1) on Saturday night at Amway Center.

The Heat, which led by as many as 16 points in the third quarter before head coach Erik Spoelstra took out most of his regular rotation players, couldn’t respond to an Orlando rally in the second half.

Miami star center Hassan Whiteside, who had 17 points (8-of-13 from the field) and an impressive 15 rebounds, started alongside newly acquired fellow big man Kelly Olynyk on the night.

“It was really good having him out there,” Whiteside said. “I think coach Spo will figure it out. I’m excited with playing with any of the guys. If they start, if they don’t start, I don’t mind.”

Olynyk, who started in place of forward James Johnson, struggled from the field en route to just two points (1-of-7 from the field) to go along with seven boards, four assists and four steals.

For the Heat, guard Josh Richardson put together an all-around stellar performance with a team-high 19 points, four assists, four steals and two rebounds.

For Orlando, rising star power forward Aaron Gordon finished with 19 points and six rebounds, while highly-touted rookie forward Jonathan Issac had 13 points and five boards off the bench in the victory.

Up next, the Heat will return home to take on the Charlotte Hornets at American Airlines Arena on Monday night. The contest, which will tip off shortly after 7:30 p.m. ET, will be broadcast live locally on Fox Sports Sun.
[xyz-ihs snippet=”Responsive-ImagenText”]