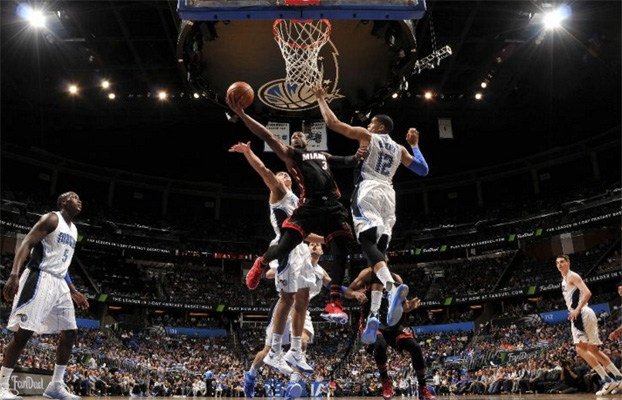 (Orlando, FL) – Following their dramatic 94-88 overtime victory against the New Orleans Pelicans on Christmas Day, the Miami Heat (18-11) stormed back from multiple double-digit deficits to knock off the Orlando Magic (17-13) by a score of 108-101 at Amway Center on Saturday night.

Despite trailing 56-44 at halftime and being down by as many as 15 points in the third quarter, the Heat continued to scratch and claw their way back into the game.

“This is not the type of game where we can have 18-20 turnovers and expect it to turn out like it did yesterday (versus New Orleans),” emphasized Heat head coach Erik Spoelstra before the matchup against Orlando.

Power forward Chris Bosh (who recorded a double-double with 24 points, 10 rebounds and three assists) and shooting guard Dwyane Wade (24 points, six assists and two steals) both came up clutch down the stretch and helped propel Miami to outscore Orlando 39-25 in the final frame.

On the night, Wade shot an efficient 7-of-12 from the floor and was a perfect 10-of-10 at the charity stripe. As a team, the Heat shot an astounding 22-of-23 from the free throw line.

“We have our identity down,” said Bosh after the game. “We know who we are. If we’re true to ourselves, we’ll stay with it. Tonight, we got to it for a half.”

Miami point guard Goran Dragic had yet another solid performance on Saturday night, as he scored 22 points (9-of-16 from the field) to go along with six boards and four assists. Guard Gerald Green, who hit some clutch three pointers in the fourth quarter, finished with 15 points.

As the saving grace for the Heat was their phenomenal free throw shooting, the opposite could be said for the Magic. Although Orlando only went to the charity stripe 13 times in the game, they missed seven of those attempts.

Five Magic players scored in double figures on the night, as the up-and-coming Magic team was led by center Nikola Vucevic (22 points, 10 boards, six assists and three steals) and second-year point guard Elfrid Payton, who finished with 18 points (9-of-13 shots made from the field) and seven assists.

Small forward Tobias Harris, who currently averages 14.6 points and 7.3 rebounds per game this season for the Magic, finished the game with 13 points, six rebounds and two steals.

Up next, the Heat will return home to take on the Brooklyn Nets (8-22) on Monday night at American Airlines Arena. The contest, which is scheduled to tip off shortly after 4:30 pm ET, will be broadcast live locally on Fox Sports Sun.
[xyz-ihs snippet=”Responsive-Ad”]