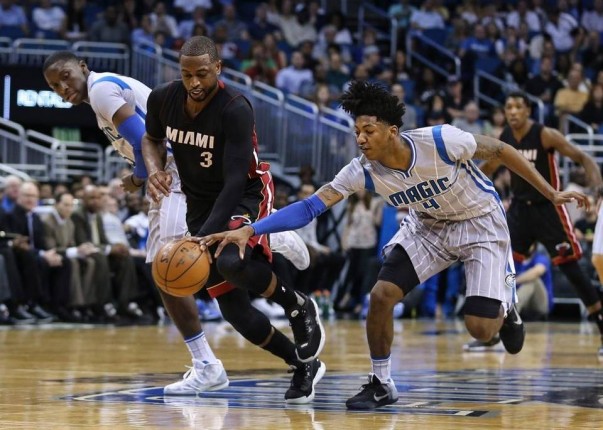 (Orlando, FL) – Despite scoring five points in the final minute to tie the game, the Miami Heat ended up on the short end of the scoreboard as they dropped a 112-109 road contest to the Orlando Magic at Amway Center on Friday night.

However, just 10 seconds later, Nikola Vucevic’s dunk gave Orlando the lead back and after a Johnson miss and turnover by Luol Deng, the Magic split a pair of free throws with 2.7 seconds remaining. Wade’s three-pointer at the buzzer missed, sending Miami to what may turn out to be a crucial defeat.

“I’m frustrated we couldn’t get this win. I thought we fought hard,” Wade said afterward. “We just made a lot of mistakes on the defensive end of the floor.”

The Deng turnover was due to a botched inbounds play with 3.3 seconds left, which Miami head coach Erik Spoelstra took the blame for.

“It just didn’t shake free the way I thought it would. That one’s on me,” Spoelstra said.

The loss drops them to 46-33 with only three games left to play in the regular season. Coupled with Friday wins by Boston and Charlotte, the Heat now find themselves tied for the fifth seed with the Hornets. They’re also now one game behind Boston and 1.5 behind Atlanta.

“Oh well. We’ll start on the road,” Wade said. “Good teams are able to win on the road.”

Seven different Miami players scored in double figures, led by Wade’s 17, while his backcourt partner, Goran Dragic had a strong overall game with 15 points, eight rebounds and six assists. Whiteside and Deng each collected double-doubles, with Whiteside putting up 13 points and 16 rebounds and Deng gathering 10 points and 10 rebounds. The remaining trio saw Johnson and Josh Richardson chip in with 13 points apiece and Gerald Green toss in 11 on the night.

The Magic led by as many as five twice during the final period, with the first marked by a damaging reversal of fortune for Miami. Trailing 98-97 with less than four minutes left, the Heat had the chance to take a lead, but a Wade turnover quickly became a three-point play for Orlando. To compound the problem, Whiteside, who had been warned previously about complaints, was assessed a technical.

“Hassan wasn’t out of control on that play,” Spoelstra said in postgame remarks. “The officials should have let the situation diffuse, but they didn’t.”

The two teams meet up again on Sunday night, this time in Miami at American Airlines Arena for a game that will tip off just after 6 p.m. ET.
[xyz-ihs snippet=”Responsive-Ad”]