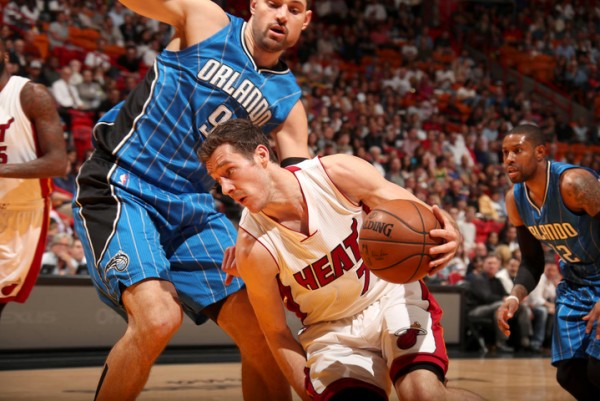 (Miami, FL) – After having their 13-game winning streak snapped on Saturday night against the Philadelphia 76ers, the Miami Heat (24-32) lost a second consecutive game on Monday night when they fell 116-107 to the Orlando Magic (21-36) at American Airlines Arena.

“It just shows you how tough this league is. Every single night, it’s a challenge.” said Heat head coach Erik Spoelstra during his postgame press conference. “There’s a lot of teams who are bunched up. We didn’t play nearly our best defensive game. Really the last two games, we didn’t really get to our identity.”

For the Magic, the win snapped an overall four-game losing streak and broke up the Heat’s eight-game home winning streak.

Magic shooting guard Evan Fournier, who had led his team in scoring heading into Monday night’s contest with 16.8 points per game, was magnificent down the stretch en route to a game-high 24 points (nine points scored in the fourth quarter) to go along with four assists and two rebounds.

“It’s always fun to play in Miami, you know,” Fournier said immediately after his team’s victory. “It’s great to have two wins in the same season in Miami, I don’t think it’s happened in a while. Good game tonight, it’s just too bad we can’t play like that every night.”

Miami’s backcourt duo of shooting guard Dion Waiters and point guard Goran Dragic, which has become one of the more powerful guard tandems in the NBA, finished atop the Heat’s scoring chart with 23 and 22 points, respectively, in a losing effort.

The Heat, who trailed the Magic by as many as 14 points late in the second quarter, managed to climb all the way back to take a 93-89 lead with 9:33 left in the final frame. However, the Magic did not flinch and played excellent team basketball down the stretch to pull out an improbable nine-point victory on the road.

“There was only one response to a poor performance like we had against Dallas, that was to come out and play with maximum effort, maximum focus, and maximum togetherness,” said Magic head coach Frank Vogel. “I thought we were connected and played extremely hard and focused throughout the game.”

Miami had a very tough time on the rebounding front, despite Heat star center Hassan Whiteside‘s monstrous 12-point, 19-rebound effort. As a team, the Magic flexed their muscle and outrebounded the Heat by a 52-37 margin.

For the Magic, point guard Elfrid Payton came off the bench to make a huge impact with 20 points, five boards and four assists, while big man Serge Ibaka had 17 points and eight boards of his own on the night.

Up next, the Heat will look to pull off a big upset on the road as they travel to take on a Western Conference stud in the Houston Rockets (40-17) at Toyota Center on Wednesday night. The contest, which is scheduled to tip off shortly after 8:00 p.m. ET, will be broadcast live locally on Fox Sports Sun.
[xyz-ihs snippet=”Responsive-ImagenText”]