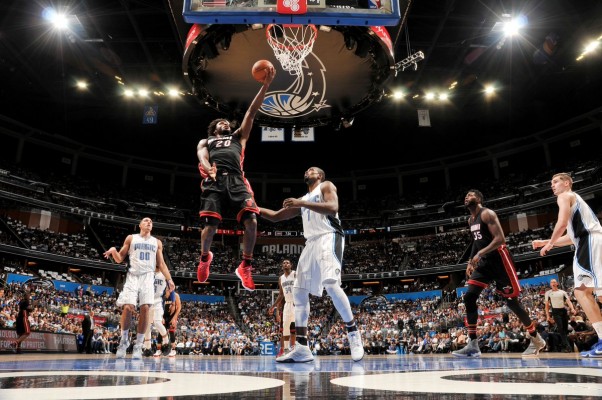 The Heat benefited from a balanced attack on offense, which featured six players scoring in double figures. Each of the nine players that received minutes from Miami head coach Erik Spoelstra scored at least six points on the night.

“I liked it. There was a ton of emotion. Guys were really anxious and eager to play this game after a month of training camp,” coach Spoelstra said after the game. “We responded with a big third quarter defensively that really got us out into the open court. The energy, the effort and the toughness defensively was there.”

Rising star center Hassan Whiteside was a dominant presence in the paint, as the Miami big man went off for 18 points (9-of-16 shots made from the field), 14 rebounds, four blocked shots and one assist.

“I come out here and I play. My teammates made it easier for me and we just played as a team. We come out here with a chip on our shoulder. A lot of guys are counting us out, so these guys have an edge to them. I’m excited. These guys are great and I love playing with these guys,” Whiteside said.

Heat point guard Goran Dragic was very solid across the board with 16 points, six assists and six boards, while second-year small forward Justise Winslow had 15 points, eight rebounds and four assists in 34 minutes of action.

“We know our identity, and that’s the defensive end, so we just stuck with it. Shots aren’t going to always fall,” Winslow said. “Just keep attacking. That’s the type of team we are: to get in the paint and make plays from there.”

Off the bench, Miami guard Tyler Johnson had 15 points (7-of-11 from the field) to go along with six boards and three assists, while newcomer forwards James Johnson and Willie Reed scored in double figures with 11 and 10 points respectively.

For the Magic, all five of their starters scored in double figures, as they were led by shooting guard Evan Fournier, who led all players in scoring with 20 points, four assists, four boards and two steals. Center Nikola Vucevic had a double-double with 17 points, 14 rebounds and three assists, while point guard Elfrid Payton had 16 points, five assists and two blocks.

The victory was the sixth straight on opening night for the Heat, who started a new era in Miami without legendary shooting guard Dwyane Wade and All-Star power forward Chris Bosh. After trailing by seven points in the first quarter and facing a 53-50 deficit at the half, the Heat came out on fire to outscore the Magic 30-16 in the third quarter and led by as many as 19 points in the final frame.

Coach Spoelstra, who enters his ninth season as a head coach of the Heat, won his 400th career game at the helm on Wednesday night and joined Heat president Pat Riley as the only two coaches to have over 400 wins with the franchise.

“I really want to be as gracious as possible. I was just talking about it with Pat and he was talking about when he was with the Lakers, he was like, ‘Oh, 400, when I was already that many years I was at about 700,’ so that keeps it in perspective,” Spoelstra said with a laugh. “I have incredible gratitude that I work for this organization and that I’ve had an opportunity to coach this many games. I should’ve been fired probably three or four times before this point.”

Up next, the Heat will begin a three-game home stand on Friday night when they host the Charlotte Hornets at American Airlines Arena. The contest, which is scheduled to tip off shortly after 8 p.m. ET, will be broadcast live locally on Fox Sports Sun.
[xyz-ihs snippet=”Responsive-ImagenText”]