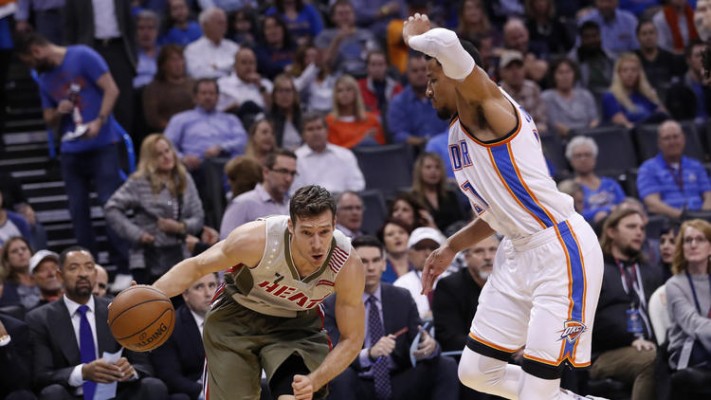 (Oklahoma City, OK) – From the opening tip-off on the road at Chesapeake Energy Arena, the Miami Heat (2-4) were simply outplayed across the board by the upstart Oklahoma City Thunder (6-1) by a score of 97-85 on Monday night.

It was a night to forget for the Heat, who endured a ferocious 20-0 Oklahoma City run during the third quarter.

“It was tough to say what the biggest challenge was,” Heat head coach Erik Spoelstra said after the game. “We had some rough offensive possessions. We simply just have to get better. We will.”

While superstar Thunder point guard Russell Westbrook had a night to forget, center Enes Kanter caused havoc in the paint all night long en route to a game-high 24 points in just 21 minutes of action. Kanter shot an eye-opening 10-of-12 from the field off the bench to go along with 10 rebounds.

Rising star center Hassan Whiteside, who continues to tear it up for the Heat on both the offensive and defensive ends, had a rare game in which he struggled. On the night, Whiteside shot just 2-of-8 from the field, but had double-digit rebounds with 12.

“Their whole team was gang-blocking me out on the rebounds,” Whiteside said in the locker room after the game. “Still, double-digit rebounds. I missed a lot of hooks that I normally make. They’re not gonna go in every night.”

Newly acquired shooting guard Victor Oladipo had 17 points, two assists, and two rebounds while Domantas Sabonis had a season-high 15 to go with 10 rebounds. Russell Westbrook added 14 points and 11 assists for the Thunder, who improved to 6-1 on the season 4-0 at home.

For the Heat, power forward James Johnson led Miami with 18 points, while point guard Goran Dragic and starting small forward Luke Babbitt each had 11 points in the starting lineup for the Heat on Monday night.

Up next, the Heat will host the Chicago Bulls (4-3) at AmericanAirlines Arena on Thursday night. The contest, which is scheduled to tip off shortly after 8:00 p.m. ET, will be broadcast nationally on TNT.
[xyz-ihs snippet=”Responsive-ImagenText”]