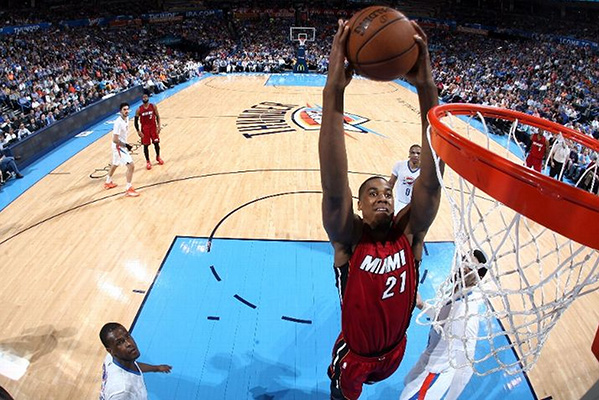 The Heat’s three-game win streak was snapped as Miami struggled with turnovers and rebounding. The Heat had 18 total turnovers which led to 30 points by the Thunder.

OKC also bested Miami in the rebounding department as the Thunder had 52 total rebounds in comparison to the Heat’s 40 rebounds for the game. OKC also had 22 offensive rebounds while the Heat had just 13.

Miami was led by Hassan Whiteside’s 13 points. Whiteside scored all of his points in the first half before going scoreless in the second half. He would end up fouling out of the game in the fourth quarter. Dwyane Wade, Goran Dragic and Mario Chalmers had 12 points apiece.

The Thunder were paced by Russell Westbrook who posted his 10th triple-double of the season. He finished with 12 points, 17 assists and 10 rebounds in the victory over Miami. It was his eighth triple-double in his past 13 games.

Enes Kanter led OKC in scoring with 27 points and 12 rebounds on 12-of-20 shooting. The 7-footer consistently dominated in the paint, grabbing rebounds and scoring at will. The Thunder had six scorers overall who scored in double figures.

The loss kept the Heat a game-and-a-half back of the Milwaukee Bucks for the sixth spot in the Eastern Conference. The Bucks had lost earlier in the day to the Cleveland Cavaliers. Had Miami won versus OKC they would have ended the day just a half-game behind Milwaukee before the two teams play each other on Tuesday night.

Due to the Thunder’s dominance in the rebounding department, they outscored Miami 56-40 in the paint.

When asked on what specifically OKC did to make Miami struggle so much offensively, Coach Erik Spoelstra had the following to say in the postgame press conference:

“They got into us so they sped us up. They definitely sped us up and got us in some tough possessions with either turnovers or we didn’t get the ball where it needed to go. They have a unique collection of speed and quickness that prevented us from getting into a rhythm.”

Following the loss, Wade was asked on whether playoff seeding is important as the Heat enter the last month of the regular season:

“When you look at it, you wanna see who wins and loses. For me we gotta win basketball games. It’s only as important as how many games you can win. When you get done is where you end up. We are trying to win every one so seeding is not that important. I don’t think it really matters because you just wanna be in the playoffs. Wherever you end up is what you deserve.”

Udonis Haslem led the Heat on the glass with seven rebounds. Michael Beasley had 10 points while Henry Walker went scoreless as he shot 0-for-6 from the field.

The Heat will continue their road trip on Tuesday night when they visit the Bradley Center to play the Milwaukee Bucks in a battle for playoff positioning. The game is set for tipoff at 8 pm E/T and will be broadcast on Sun Sports.
[xyz-ihs snippet=”Responsive-ImagenText”]