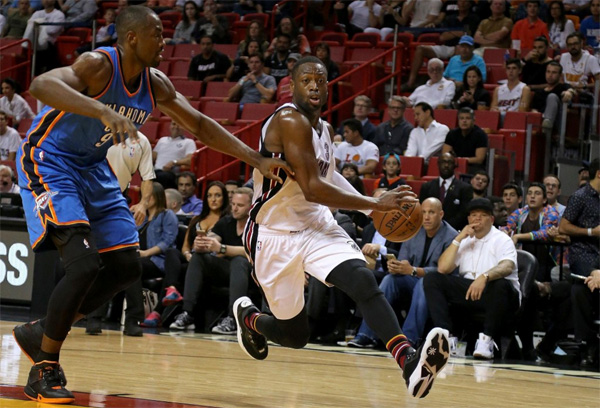 The matchup featured the most lead changes of any game in the NBA this season (38) and had 11 ties. The game was close throughout and literally came down to the final seconds.

After Kevin Durant converted on a three-point shot with 1:32 left to put the Thunder up 95-93, Dwyane Wade zig-zagged to the hoop and converted on a floater to tie the game at 95-all with 28.3 seconds remaining.

The Thunder would then receive an opportunity to take the lead once again on their next possession, but Durant missed a three-point shot attempt over Heat rookie Justise Winslow with less than eight seconds remaining.

On the Heat’s next—and final—possession, Wade once again drove to the hoop and was fouled. The veteran shooting guard converted on both of his free throw attempts to give Miami its final points of the game. Following an Oklahoma City timeout, Thunder guard Russell Westbrook attempted an off-balance three-point shot attempt that was off the mark to close the game for the Heat.

Wade finished the game with 28 points, four rebounds and four assists in his most clutch performance of the season. The 33-year-old scored the team’s final eight points down the stretch. The Heat had five total players in double figures, with Chris Bosh contributing 16 points and eight rebounds and Goran Dragic adding 14 points and eight assists.

Durant led the Thunder in scoring with 25 points, but did so on 9-of-21 from the field. Westbrook also scored 25 points in pacing the Thunder’s scoring attack, but both of OKC’s star players failed to knock down the shots when they needed it most. Oklahoma City had two other players in double figures with Dion Waiters posting 13 points and Enes Kanter notching 10 points and three rebounds.

The 6’10” Durant was guarded by Heat rookie Winslow for much of the fourth quarter. Despite heaping praise upon Winslow, the Thunder star maintains he still had the shots he wanted versus the rookie:

“I like Winslow, he’s strong, he’s aggressive, but I felt like I got every shot I wanted.”

Wade did not downplay the impact of the Heat’s win over the Thunder following the game:

“That felt like a playoff game and it was our most complete game of the season. They have a good team. This is our best win of the year.”

With Luol Deng once again sidelined due to his hamstring injury, Gerald Green started the game at small forward. Unlike in past games, however, Green struggled mightily versus the Thunder—he was the only Heat starter to not score in double figures. He ended the night with just five points on 2-of-9 from the field.

While the Heat were missing one of their key veterans, their young players saw some action as a result. Rookie Josh Richardson played eight minutes and contributed one point and two rebounds. It was just his seventh appearance of the season.

Josh McRoberts played just 19 minutes, but had a tremendous impact in the win. He had 12 points on 5-of-7 shooting with three rebounds and four assists. Tyler Johnson also saw 18 minutes of playing time and had eight points in his time on the court.

While Wade was clearly the star of the game, he deflected the praise onto the young players:

“Our job is to come in every day and get better. Learn from the mistakes that we make. We knew we had a tough task today and I like to see our young guys growing. That’s what it’s all about.”

The Heat will continue their home stand as they host the Cleveland Cavaliers for the teams’ second meeting of the season. The game will take place on Saturday night at 8 PM EST and it will be broadcast nationally on NBA TV.
[xyz-ihs snippet=”Responsive-Ad”]