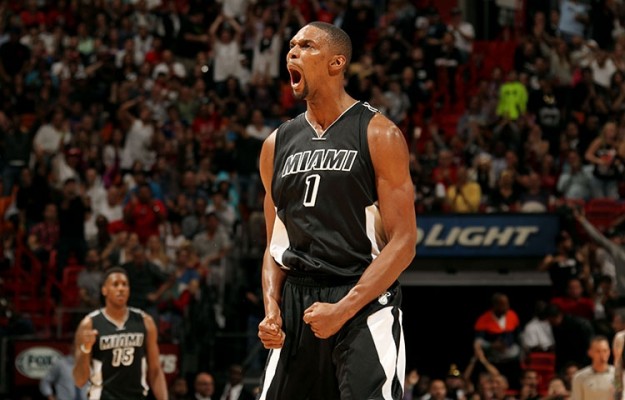 (Miami, FL) – The Miami Heat (22-29) finally got back to their winning ways on Monday night after overcoming a 14-point deficit in the first quarter to pull off an inspiring 109-95 victory over the New York Knicks (10-42). Five players scored in double figures for the Heat, led by Chris Bosh’s 32 points and six assists.

The Heat completely took over in the second half after they outscored the Knicks 25-18 in the third quarter. A big part of that was due to Hassan Whiteside, who finally took control of the game on both ends of the floor before his fourth foul of the night and third technical of the year sent him to the bench late in the period.

“They came out and really jumped at us. They made more plays than us, specifically in the fourth quarter,” said Knicks head coach Derek Fisher.

Whiteside returned today after missing Friday’s game against the San Antonio Spurs with a sprained ankle and wasn’t his usual nimble self as he struggled with foul trouble throughout the game. He finished with seven points, nine rebounds and two blocks.

After a reporter asked Heat head coach Erik Spoelstra if he had a specific foul limit threshold when taking Whiteside out of games early in the first quarter, Spoelstra responded with, “I would play [Whiteside] with two fouls in the first. I think it’s good for him to go through that.”

After Whiteside was sent to the bench late in the third, he did not play for the rest of the game, and he didn’t need to.

Bosh and Chris Andersen closed out the game with strong play on both ends of the floor in the fourth quarter. “Birdman” finished the game with 10 points, four rebounds and three blocks to make up for Whiteside’s off night.

“We can play without thinking so much and just sticking to the simple plays. We have to work the same habits, win or lose,” Bosh said after the game.

After a strong first half, Carmelo Anthony went to the locker room with an apparent knee injury midway through the fourth quarter and did not return. Anthony finished with 26 points, four rebounds and four assists as Miami outscored the Knicks 57-39 in the second half.

The Heat started the game looking lost on defense as the Knicks went on a 21-4 run midway through the first quarter, capped off by four triples from Anthony to put New York up 30-17.

Despite Andersen and Mario Chalmers hitting back-to-back threes to cut the Knicks lead to nine, the Knicks still shot 52% from the field en route to a 32-23 first quarter lead.

It was a different story in the second quarter as Bosh scored 13 of his 32 points and Miami produced a 29-point period. The Heat outrebounded the Knicks 13-5 in the second quarter despite Whiteside not playing for most of the frame due to foul trouble. Newly signed shooting guard Tyler Johnson started the second quarter for the Heat but was unable to score in his 11 minutes of play as the Heat went into the locker room down 56-52.

Chalmers and Norris Cole combined for 30 points and 14 assists as Miami pulled even with the Charlotte Hornets for the seventh seed in the East after their fifth straight win over the Knicks.

“A lot of energy with a lot of guys involved and contributing. It was good to see our bench come in and give us a lift,” said Spoelstra.

The Heat face off against LeBron James and the Cleveland Cavaliers on Wednesday night at Quicken Loans Arena. Tip-off is set at 8:00 pm ET and will be broadcasted nationally on ESPN.
[xyz-ihs snippet=”Responsive-Ad”]